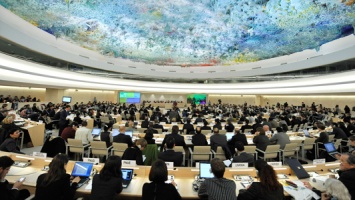 On Friday 22 March, the United Nations (UN) Human Rights Council (the Council) adopted a resolution, tabled by the State of Palestine, the Organisation of Islamic Conference and the Arab Group, on the report of the International Independent Fact-Finding Mission on Israeli Settlements in the Occupied Palestinian Territory (OPT), including East Jerusalem.

This report outlined the extensive violations of international human rights and humanitarian law integral to Israel’s settlement enterprise and the systematic nature in which it has implemented since 1967. The Mission concluded that settlements, including all related activities that help to sustain, promote, and expand them, are resulting in the fragmentation and annexation of occupied territory while undermining the right to self-determination of the Palestinian people. Given the impunity with which Israel has been operating for 46 years, the relentless rate of construction and expansion of settlements, and the resulting denial of the right to self-determination of the Palestinian people, there is an urgent need for States to take definitive measures to reverse these illegal policies.

Though the recommendations in the report were neither detailed nor extensive, the Fact-Finding Mission recognised the need for concrete action by calling on individual Member States of the UN to comply with their obligations stemming from Israel’s breaches of peremptory norms of international law by, inter alia, ceasing any form of recognition of the unlawful situation.

The Palestinian Human Rights Organisations Council (PHROC) expressed to the Council the importance of ensuring that the recommendations of the report are implemented through effective measures aimed at advancing the rights of the Palestinian people. To that end, PHROC urged the Council to adopt a strong resolution fully endorsing the report of the Fact-Finding Mission. PHROC requested a further report by the UN Secretary-General specifying the means by which States could fulfil their obligations to cease recognition, aid or assistance to Israel’s settlement enterprise and to cooperate to bring the unlawful situation to an end.

Today, PHROC expresses its disappointment that the resolution adopted by the Council merely welcomed, rather than endorsed, the report. While the resolution “requests that all parties concerned, including United Nations bodies, implement and ensure the implementation of the recommendations” of the report, the absence of any clear indication of how parties must implement such broad recommendations allows continued inaction by the international community.

Repeated political decisions have prevented the implementation of the 2009 UN Fact-Finding Mission on the Gaza Conflict and, indeed, a 1979 UN Security Council commission on settlements which came to similar findings to those of this most recent Mission. These decisions threaten to undermine the credibility and perceived efficacy of such UN mechanisms, and the prioritisation of political considerations over the rights of the Palestinian people has only provided  time for Israel’s settlement enterprise to expand.

PHROC deeply regrets the influence of European States in dictating that a stronger, more detailed resolution would not have received consensus support at the Council and that, without this support, the resolution risked stalling due to a lack of political impetus. The adoption of such a weakly-worded resolution nevertheless demonstrates the existing lack of political will within the Council and signifies a missed opportunity by the Palestinian leadership to compel meaningful action by the international community. We take this opportunity once again to remind the Palestinian leadership that the fundamental rights of the Palestinian people are matters of binding international law. They must not be left to short-term political calculations, but rather established as the foundation of any diplomatic process.

Despite repeated calls by Palestinian civil society to the UN and its Member States to uphold their obligations stemming from Israel’s continuous violations of international law, the rights of the Palestinian people have once again been sidelined in favour of political expediency. We therefore urge the international community, including individual Third States, to take effective action that will halt Israel’s violations of Palestinian rights, including through the adoption of restrictive measures on trade involving settlements.