We, the undersigned Palestinian and Israeli civil society organisations, urge the European Parliament (EP) Committee on Foreign Affairs to immediately dispatch a parliamentary fact-finding mission “to assess the current situation with regard to the detention conditions of Palestinian prisoners, including women and children, and the use of administrative detention”, in line with an EP resolution of 13 March 2013.

While we recognise the European Union’s (EU) increasing attention to the issue of Palestinian political prisoners, we are now expecting the EU to act in accordance with its own commitments, including those outlined in the May 2012 Council Conclusions on the Middle East Peace Process and the 2013 EU-PA Action Plan. In this regard, we look to the Committee on Foreign Affairs to take a lead role in ensuring that Israel complies with its international humanitarian and human rights law obligations by implementing the above mentioned EP resolution.

There are currently almost 5,000 Palestinian political prisoners, including 16 women and 238 children, held by Israel. This figure also includes 14 Palestinian Legislative Council (PLC) members, 156 administrative detainees and 423 prisoners from the Gaza Strip. Most Palestinian prisoners are detained in 17 prisons, four interrogation centres and four detention centres. All but one of the prisons are located inside Israel, in direct contravention of Article 76 of the Fourth Geneva Convention which provides that an Occupying Power detain protected persons, including        the occupied Palestinian people, in the occupied territory. As a result of Israel’s violation, Palestinian prisoners encounter difficulties in meeting with Palestinian defence counsels and receiving family visits as their relatives are denied permits to enter Israel on “security grounds”. 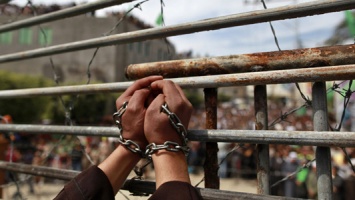 Furthermore, Palestinian prisoners are held in overcrowded prisons where there is a lack of basic amenities, poor hygiene, a significant lack of fresh air and inadequate living space. Palestinians are currently allotted about 2.9 square meters of living space per person and any existing windows in prison cells are often covered by iron sheets, thus reducing the availability of natural sunlight. All amenities in the prisons, such as television, clothing, blankets, and books are considered “privileges” and can be revoked at any time.

The 14 May 2012 agreement between the Israeli Prison Service (IPS) and the prisoners which brought an end to the mass hunger strike involving 2,000 prisoners has resulted in little improvement. In fact, the agreement has lead to an escalation in individual hunger strikes, in which currently 12 prisoners/detainees are engaged. These prisoners/detainees are protesting for various reasons, including their continued administrative detention, denial of family visits and prison conditions. Ayman Hamdan has been on a hunger strike for 73 days and is in critical condition. He is protesting his continued administrative detention.

According to international law and Israeli courts no one should be detained for their political opinions. Nevertheless, Palestinian political leaders are routinely arrested and detained as part of an ongoing Israeli effort to suppress Palestinian political processes. To date, over 40 PLC members have been detained by Israel, three of whom also had their Jerusalem residency revoked.

Israeli authorities regularly neglect their duties to provide medical care for Palestinian prisoners, as required by the Geneva Conventions. Treatment is often inadequate and considerably delayed. In 2013 alone two Palestinians have died as a result of medical neglect. According to the Special Rapporteur on the situation of human rights in the Palestinian territories occupied since 1967, Mr. Richard Falk, “there have been at least 54 cases of clear medical neglect that have resulted in the deaths of Palestinians in Israeli prisons”. Furthermore, prison medical staff lack professional training and are employed directly by the IPS. Being under the authority of the IPS rather than that of the Ministry of Health, their sense of dual loyalty intensifies, as a result of direct or implied pressures by the "security"-political system.

Since 1967, 73 Palestinians have been tortured to death while under Israeli interrogation. Most recently, Mr. Arafat Jaradat was tortured to death in February 2013. According to the Palestinian Authority’s chief medical examiner, Mr. Jaradat’s “death was caused by nervous shock resulting from severe pain, which was due to injuries inflicted though direct and extreme torture”. Methods of interrogation and torture that Palestinian detainees are subjected to include beatings, tying prisoners in “stress positions”, interrogation sessions that last up to 12 consecutive hours, depriving prisoners of sleep and other sensory deprivation, isolation and solitary confinement, and threats against the lives of their relatives.

Finally, the continued arrest, detention and imprisonment of Palestinian children is extremely alarming. According to a 2013 UNICEF report the “ill-treatment of Palestinian children in the Israeli military detention system appears to be widespread, systematic and institutionalized”. The same report details that “in the last ten years, an estimated 7,000 children have been detained, interrogated, prosecuted and/or imprisoned within the Israeli military justice system”. Furthermore, the United Nations Committee on the Rights of the Child recently urged Israel to “guarantee that juvenile justice standards apply to all children without discrimination and that trials are conducted in a prompt and impartial manner, in accordance with minimum fair trial standards”, while also urging Israel “to dismantle the institutionalized system of detention and use of torture and ill-treatment of Palestinian children at all stages of the judicial procedure”.

In light of the above, we recommend the Committee on Foreign Affairs to urgently launch a fact-finding mission on Palestinian prisoners which includes meetings with Israeli officials, visits to Israeli detention centres, interrogation centres and prisons. In turn, the mission should meet with a range of current detainees/prisoners, including female prisoners, child prisoners, PLC members, and those under interrogation during the delegation’s visits. In addition, and also in the case that Israel denies the mission any access to such sites, we recommend that the delegation also include a visit to an Israeli military court; meet with former prisoners; prisoner’s families; Palestinian and Israeli organizations that deal specifically with prisoners; the Palestinian Ministry of Detainees and Ex-detainees; and Israeli Military Judges, the Military Prosecution Office and the Israeli Prison Service.

This letter is also endorsed by: