On Friday, 14 July 2017, following an alleged attack near Al-Haram Al-Sharif (Al-Aqsa compound) in the Old City of Jerusalem,   the Israeli government took measures amounting to collective punishment against the Palestinian population.

Israeli Prime Minister Benjamin Netanyahu ordered the closure of the Al-Aqsa compound for three days, beginning the morning of Friday, 14 July 2017. The  religious site reopened for noon prayers on Sunday, 17 July 2017. During this period, the Old City was closed off to Palestinians except for those whose IDs confirmed their residence in the Old City. 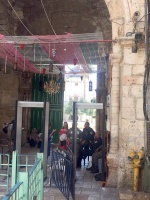 Also immediately following the incident, the Israeli police arrested 58 employees of the Awqaf (Religious Endowment) who were at work in the Al-Aqsa compound on Friday morning. All of the employees were detained at the Masqubiyeh (Russian) detention center. Fifty-five of these employees were released in the afternoon or evening of the same day, while 3 employees were detained until  the evening of Monday, 17 July 2017. Israeli authorities also contacted  18 employees of the Awqaf, and informed them that they were prohibited from entering the Al-Aqsa compound without detailing the timeframe. Only one employee was given a formal written order which prohibits him from entering for four months.