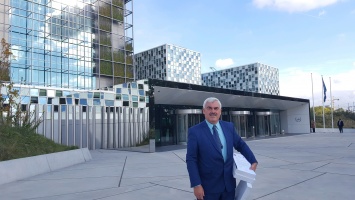 The Hague, 20 September 2017: Today, four Palestinian human rights organisations submitted their fourth substantive communication to the Prosecutor of the International Criminal Court, alleging that high-level Israeli civilian and military officials have committed war crimes and crimes against humanity in the occupied West Bank including East Jerusalem.

The director of Al-Haq, Mr. Shawan Jabarin, who together with human rights lawyer Mrs. Nada Kiswanson submitted the communication, stated that ‘this 700-page communication provides a compelling and reasonable basis for the Prosecutor to open an investigation into crimes alleged to be committed against the Palestinian population in the occupied West Bank including East Jerusalem. Over the past fifty years Israel has subjected the Palestinian population to a belligerent occupation that deprives them of their fundamental human rights and subjects them to heinous crimes. The communication to the International Criminal Court offers hope that anybody that commits crimes against Palestinians will be held to account. We are convinced that there can be no lasting and genuine peace without justice. ’

The director of the Palestinian Centre for Human Rights, Mr. Raji Sourani, said that ‘the transfer of Israeli settlers into the occupied Palestinian territory constitutes a unique war crime in that it is coupled with the confiscation of massive tracts of Palestinian land, the extensive destruction of Palestinian property, and the tearing apart of the Palestinian social fabric and way of life. Israel’s actions in the occupied West Bank is evidently one of colonisation. The international community long ago decided that colonisation is reprehensible and with the Rome Statute it is punishable through the crime of settler transfer.’

The director of Al Mezan Center for Human Rights, Mr. Issam Younis, said that ‘Israel has been undermining the integrity of the Palestinian territory since at least the beginning of its occupation in 1967. The isolation of Gaza, in addition to the regular, full-scale military assaults, ultimately enables Israel to consolidate its control over the whole occupied Palestinian territory and deny Palestinians their internationally recognized right to self-determination. Moreover, Israel’s closure of the Gaza Strip and its associated buffer-zone policy impede Palestinian collective enjoyment of the occupied territory and its resources.’

This communication is the fourth one submitted by the four Palestinian human rights organisations. The first three related to crimes allegedly committed by high-level Israeli civilian and military officials in the occupied Gaza Strip, including in the context of the 2014 military offensive.

The ICC has jurisdiction to examine war crimes, crimes against humanity, and genocide committed on the territory of the State of Palestine since 13 June 2014. The Prosecutor is currently carrying out a preliminary examination into the situation in Palestine. The four organizations urge the ICC Prosecutor to urgently open a full investigation into the situation in the occupied Palestinian territory. The Palestinian human rights organisations believe that an investigation is a necessary step towards ending the culture of impunity that has long prevailed in regard to Israeli crimes and to hold high-level political and military officials accountable. In doing so, it is imperative that the views of Palestinian victims are addressed in the interests of justice and reparations made. This is imperative to ensure that regional and international peace and security prevails.