Main Menu
Five Palestinians killed during Protests across the OPT since 7 December 2017
Latest Topics
In Light of Israel’s Plans to De Jure Annex Parts of the Occupied Palestinian Territory, Al-Haq Urges the Diplomatic Community to Implement Effective Measures
Palestinian Civil Society Reiterates Call for Immediate Targeted Sanctions to Stop Israel’s Annexation and Apartheid
Civil Society Organisations Urge for the Annual Updates of the Database of Businesses Involved Illegal Settlement Enterprise
The International Day to Support Victims of Torture
Database Letters: Al-Haq Calls on Home States to Businesses Listed in the United Nations Database as Engaged in Activities with Israeli Settlements to Take Action
Human Rights Groups Submit to UN experts on the Israeli policy of withholding the mortal remains of indigenous Palestinians
Five Palestinians killed during Protests across the OPT since 7 December 2017
19، Dec 2017 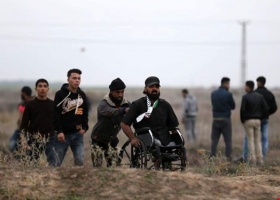 Protests and demonstrations have continued across the occupied Palestinian territory (OPT) since United States President Trump’s announcement on Jerusalem on 6 December 2017. Thousands of Palestinians have taken to the streets to protest the decision, gathering at Israeli checkpoints, military zones, and entrances of cities and towns in the occupied West Bank, including East Jerusalem, and the Gaza Strip. The Israeli Occupying Forces (IOF) have forcibly targeted peaceful Palestinian assemblies throughout the OPT, dispersing protesters by shooting live bullets, rubber-coated metal bullets, and firing tear gas and sound grenades.

Over the past two weeks, at least 3537 Palestinian demonstrators have been injured in the OPT1 and eight have been killed by the IOF, including three as a result of Israeli airstrikes on the Gaza Strip,2 and five during protests, which took place across the OPT, as a result of Israel’s unnecessary, excessive, and disproportionate use of force against Palestinians. On Friday, 8 December 2017, Mahmoud Abd Al-Majid Al-Masri, 29, from Khan Younis was killed by the IOF in the Gaza Strip. On Friday, 15 December 2017, four more Palestinians were killed by the IOF, including: Basel Mustafa Ibrahim, 29, from ‘Anata, Jerusalem, Muhammad Amin Mahmoud ‘Aqel, 19, from Beit ‘Ula, Hebron, Yasser Naji Sukkar, 23, from Gaza’s Al-Shuja’iyah neighbourhood, and Ibrahim Nayef Abu Thuraya, 29, from Deir Al-Balah also in the Gaza Strip.

Mahmoud participated in demonstrations on 8 December 2017 near Gaza’s eastern fence, east of ‘Abasan Al-Jadida, east of Khan Younis. The protest lasted a few hours during which the IOF shot live and metal bullets and fired tear gas at the crowd. Around 3:00 pm, Mahmoud sustained a live bullet shot to his right thigh while he was attempting to hang up the Palestinian flag on the eastern fence. Youths rushed to transport him to an ambulance around 200 metres away but were prevented from reaching it by the IOF who continued to shoot tear gas and rubber bullets in their direction. While he was being carried, Mahmoud was injured by a tear gas canister in the back and fell to the ground. Youths attempting to carry him to the ambulance were also injured. By the time they reached the ambulance and arrived at the European Gaza Hospital, nearly an hour later, Mahmoud had lost consciousness as a result of severe bleeding. Attempts to resuscitate him were unsuccessful and he was pronounced dead within ten minutes of reaching the European Gaza Hospital, around 4:00 pm.3

Around 2:00 pm on 15 December 2017, Muhammad Amin was shot several times by the IOF near the northern entrance of Al-Bireh, following an alleged attempt to stab one of the soldiers in the vicinity. The IOF, composed of Israeli Border Police, shot three times at Muhammad Amin, twice in the legs and the third time in the chest. Upon approaching him, the IOF noticed he was wearing what was later confirmed to have been a fake belt. The IOF then continued to shoot at him once he was already incapacitated. In a statement, the Israeli Border Police later confirmed that the initial shots had been fired before the IOF had seen the fake belt.4 Muhammad Amin was taken by paramedics to the Musallam Hospital in Al-Bireh where he was pronounced dead at approximately 6:20 pm that day.

On the same day, around 3:30 pm, an IOF sniper shot Basel with a live bullet in the chest during a protest in ‘Anata, East Jerusalem, in which only about ten youths had participated. Basel had left his home, about 50 metres away from the location of the protest, wearing flip-flops and pyjamas. He did not participate but observed the protest with his friend, Mahmoud Muhammad ‘Alayyan, a journalist who had been covering the demonstration. The IOF shot mainly live bullets at the youths during the protest, in addition to firing tear gas. Then an IOF sniper shot Basel in the chest from a 200-metre range. Mahmoud drove Basel in his car to the nearby Al-Iman Medical Centre in Anata. Attempts to resuscitate Basel failed and doctors called a Palestinian Red Crescent Society ambulance to take him to a hospital. The ambulance, which was delayed by about 40 minutes as a result of ongoing protests at the ‘Anata interchange and the checkpoint by Shu’fat refugee camp, headed with Basel towards Al-Makassed Hospital in East Jerusalem. When the ambulance reached Hizma checkpoint, the IOF stated that they had already been informed of Basel’s injury but that he was prohibited from entering Jerusalem. Forced to turn back, the ambulance headed towards Ramallah Government Hospital, where Basel’s death was pronounced within minutes of his arrival around 5:00 pm.

Meanwhile in the Gaza Strip, Yasser, a resident of Al-Shuja’iyah, was shot in the head by an IOF sniper at approximately 3:35 pm that same day, while he was protesting at Gaza’s eastern fence near the Nahal ‘Oz military site, east of Al-Shuja'iyah. He was taken to Al-Shifa Hospital where his death was pronounced upon his arrival. Ibrahim, a prominent human rights activist and resident of Deir Al-Balah, was then shot by an IOF sniper in the forehead at approximately 4:45 pm while protesting in the same location. He was also pronounced dead shortly after his arrival at Al-Shifa Hospital. Ibrahim, who had lost both of his legs on 11 April 2008 as a result of an Israeli airstrike during Israel’s 2008-2009 offensive on the Gaza Strip, was protesting around 15 metres from Gaza’s eastern fence when he was shot while sitting in his wheelchair. According to Al-Haq documentation and footage of the incident, Ibrahim was only holding a Palestinian flag and did not pose any threat to the IOF when he was shot in the forehead in what appears to have been a deliberate act of killing. Overall, Al-Haq documented 45 injuries during the demonstration in which Yasser and Ibrahim were killed, including 16 as a result of the IOF’s use of live fire, and 20 as a result of direct hits from tear gas canisters.5

The five killings above involved unnecessary and excessive use of lethal force against Palestinians who did not pose any threat to the IOF. The use of live fire bullets leading to the deaths of Mahmoud and Basel demonstrates Israel’s employment of unnecessary lethal force to contain unarmed protesters. Al-Haq is deeply concerned that Israel’s deliberate denial of medical treatment to Basel by refusing his ambulance entry into Jerusalem may have resulted in a significant and fatal delay in him obtaining life-saving medical treatment. Al-Haq recalls Israel’s humanitarian obligations as Occupying Power to respect and protect the wounded and the sick and, in particular, to protect the wounded from ill-treatment.6 Al-Haq especially reminds Israel of the customary law duty to provide “to the fullest extent practicable and with the least possible delay, the medical care and attention required by their condition” without distinction “on any grounds other than medical ones.”7 Similarly, Israel displayed reckless disregard for the principle of proportionality, shooting to kill rather than shooting to stop Muhammad Amin during the alleged knife attack. Footage from the incident shows that Muhammad Amin was incapacitated after the first shot. The continued shooting by the IOF amounts to an excessive and unreasonable use of force, where Israel failed to employ the least harmful measure principle to minimise resort to lethal force. Finally, Ibrahim and Yasser from Gaza were shot in the head in complete absence of an imminent threat of attack requiring resort to lethal force, which may amount to a wilful killing.8

The excessive use of force, which led to the killing of five Palestinians, may amount to an arbitrary deprivation of life in violation of Israel’s obligations under Article 6 of the International Covenant on Civil and Political Rights (ICCPR). As Occupying Power, Israel must abide by its obligations under international human rights law during law enforcement operations. Israel must therefore refrain from resorting to excessive force, respect the right to life of the occupied Palestinian people, and provide protection for the civilian population in the OPT. Moreover, the IOF must be guided by the principles of necessity, proportionality, and precautions in attack when resorting to lethal force, which may only be used in cases of self-defence and in the defence of others against imminent threat of death or injury. Israel’s use of force to deliberately silence legitimate Palestinian protest over its unlawful acts stifles the fundamental right of peaceful assembly, which Israel has a positive obligation to protect and facilitate.9

Notably, Ibrahim Abu Thuraya was protected under the Convention on the Rights of Persons with Disabilities (CRPD), by which the State of Israel is bound.10 Article 11 of the CRPD requires Israel to take “all necessary measures to ensure the protection and safety of persons with disabilities in situations of risk, including situations of armed conflict”. Under international humanitarian and human rights law, Ibrahim was entitled to special protection not only as a civilian under the control of the Occupying Power, but also as a person with disability11 who moreover lost his legs as a consequence of a prior assault by Israel on the Gaza Strip.12 The perspective of persons with disabilities must be taken into account in the assessment of whether certain conduct amounts to prohibited inhuman acts.13 As such, the killing of Ibrahim Abu Thuraya may not only amount to an arbitrary deprivation of life but also an act of torture or ill-treatment.14

The Israeli military states that it fired “selectively” at the “chief instigators of the extremely violent riots” on Friday, 15 December 2017.15 Should the killings have been deliberate, they may amount to a wilful killing, a grave breach of the Fourth Geneva Convention,16 and a war crime falling within the jurisdiction of the International Criminal Court in its preliminary examination into the situation in Palestine since 13 June 2014.17 In light of the above, Al-Haq calls on the IOF to conduct independent, impartial, prompt, thorough, effective, credible, and transparent investigations18 into incidents of excessive use of force in the OPT, especially those resulting in the killing of Palestinians, and to ensure perpetrators are held accountable.

10 The CRPD entered into force for Israel on 28 September 2012. See UN Treaty Collection, at: https://treaties.un.org/Pages/ViewDetails.aspx?src=TREATY&mtdsg_no=IV-15&chapter=4&lang=_en&clang=_en.

11 CRPD, Preamble, paragraph (u) (“Bearing in mind that conditions of peace and security based on full respect for the purposes and principles contained in the Charter of the United Nations and observance of applicable human rights instruments are indispensable for the full protection of persons with disabilities, in particular during armed conflicts and foreign occupation”) and Article 11.

18 UN Human Rights Committee, General comment No. 36 on article 6 of the International Covenant on Civil and Political Rights, on the right to life, Revised draft prepared by the Rapporteur, Advance Unedited Version, paragraph 32.