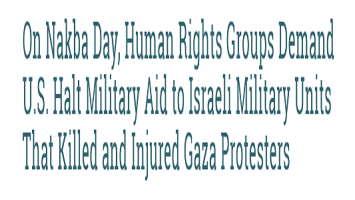 May 15, 2018, Gaza, Washington, D.C. and New York – Today, a coalition of Palestinian and U.S.-based human rights groups submitted a letter to U.S. Secretary of State Pompeo demanding that the State Department investigate Israel’s use of lethal force against Palestinians in Gaza, and halt any further assistance to Israeli military units involved in the shootings.

The “Great March of Return”, which began six weeks ago, has been leading up to today, Nakba Day, which marks 70 years since more than 750,000 Palestinians were forcibly displaced from their homes. Since protests began, human rights organizations document that the Israeli military has killed 103 people and injured more than 7,000 others, including children, paramedics, journalists, and people with disabilities. Over 3,500 people have reportedly been shot with live fire.

Advocates on the ground in Gaza report that Israel killed 57 protesters and injured over 2,000 more, in one day alone yesterday, while they demonstrated against the Trump administration’s decision to move the U.S. embassy to Jerusalem, continued to stress their internationally recognized right of return to their homes, and demanded an end to the 11-year closure of Gaza.

In the letter to Secretary Pompeo the coalition noted that both the Foreign Assistance Act (FAA) and the Arms Export Control Act prohibit the U.S. from providing aid to military units responsible for gross human rights violations, including extrajudicial killings. The FAA further bars security assistance to any government that engages in a consistent pattern of gross violations of internationally recognized human rights. In 2017, Israel was the largest recipient of U.S. military aid, receiving more than $3 billion.

Raji Sourani, Director of the Palestinian Center for Human Rights, said from Gaza, “The Israeli occupation forces’ policy and practice of willfully killing Palestinian civilians, who have been peacefully protesting, before the world's eyes, is further proof of Israel's commission of war crimes due to the full immunity granted to it by the U.S. This is also a testament to the Palestinian people's courage in their struggle against the occupation.”

Issam Younis, General Director of Al Mezan, said, “Palestinians have raised their voices in peaceful demand of their basic human rights and an end to the closure and blockade of Gaza that maintains their dire living conditions; Israel responded by deploying snipers to fire onto unarmed protesters. The use of lethal and other excessive force is a serious violation of international law, yet our efforts to challenge the policy from within Israel have been met with support for the status quo. The U.S. must therefore implement its own laws and refuse to enable the continuation of the open-fire policy through its military aid.”

Nadia Ben-Youssef, Director of Adalah Justice Project, said, “The massacre that Israel committed yesterday in Gaza was inevitable. International condemnation has come from some states, the U.N., the prosecutor of the International Criminal Court, and human rights advocates everywhere. However, in the absence of accountability and a change in U.S. policy, Israel will continue its unlawful and calculated killings of Palestinians. These horrific events reflect Israel’s violent ideology of supremacy and absolute intolerance for Palestinian human rights, and the people’s demands for self-determination, historical justice, and equality.”

Raed Jarrar, Middle East and North Africa Advocacy Director for Amnesty International USA, said, “Today's reports from Gaza are extremely troubling. As Israel's main supplier of military equipment, the U.S. must realize they are fueling human rights violations. The weapons used against the escalating number of those killed and injured may very likely have been U.S.-made weapons. The amount of force used against individuals not posing any imminent threat should be deeply concerning to both U.S. taxpayers and our elected officials. The U.S. government must take immediate steps to stop the delivery of arms and military equipment to Israel and demand credible investigations that meet international standards. Instead, unfortunately, the U.S. has moved its embassy to Jerusalem, which only rewards Israel's illegal annexation and settlement policy and further inflames the situation.”

Diala Shamas, Staff Attorney at the Center for Constitutional Rights, said, “The abhorrent death toll in Gaza, while American and Israeli officials celebrated the U.S. embassy move only a few miles away in disregard of international law, is evidence of Israeli confidence that it will not be held to account for unlawful and excessive use of force by anyone in the Trump administration.”

Read the letter here. This press release is online here.