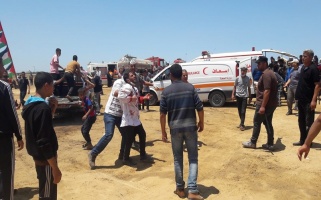 Palestinians in the Gaza Strip continue to be denied their basic human rights as a result of Israel’s naval and militarily imposed closure. Palestinians in Gaza are denied access to the West Bank, including East Jerusalem, as well as the outside world. Since the early 1990’s Israel has placed movement restrictions on the Gaza Strip, which later intensified when Israel imposed its unlawful blockade in June 2007. The militarily enforced isolation of the Gaza Strip is further exacerbated by Egyptian restrictions on the Rafah crossing.

Through its continued enforcement of an unlawful land and sea closure, Israel is de-developing the Gaza Strip, a policy and practice which directly targets the protected Palestinian population by crippling essential infrastructure, including hospitals, clinics, and commercial activity. The de-development has been further exacerbated by three full-scale military offensives on the Gaza Strip[1], which have resulted in extensive destruction and internal displacement. As belligerent occupant, Israel is in violation of its international humanitarian and international human rights law obligations to the protected population in the Gaza Strip.

For the past 19 weeks, Palestinians have been exercising their right to peaceful assembly protesting Israel’s continued closure of the Gaza Strip and marching for their right of return as per UN General Assembly resolutions (194).[2] Between 30 March 2018 and 21 September 2018, Al-Haq has documented the killing of 142 Palestinians by Israeli Occupying Forces in the Great Return March.

On 17 August, at approximately 15:00, thousands of Palestinians, including women, children and families, began arriving at the five return camps set up by the ‘Higher National Commission for the Great Return March and Breaking the Siege’ in front of the border fence. Some protesters set fire to tires and threw stones at Israeli soldiers who were positioned atop sandstone hills some 300 meters from the ‘border’. The protests continued up until 19:30. During this time, Israel Occupation Forces (IOF) responded using excessive and lethal force against Palestinian protestors. During the events, two Palestinian civilians were killed.

Saadi Akram Ahmad Abu Mu'ammar, 27 from Rafah, was wounded by a live bullet in the head. He was amongst the demonstrators, located approximately 100 meters away from the eastern border of Rafah. He was pronounced dead at Gaza Hospital.

At approximately 19:00, Karim Ahmed Ali Fatair, 29, from Deir al-Balah, was wounded by a live bullet in the head, while demonstrating at approximately 250 meters from the border fence, near Abu Hasniyeh hill east of al-Bureij refugee camp. Karim died 30 minutes after his arrival at Al-Aqsa Martyrs Hospital.

On August 24, at approximately 16:00, thousands of Palestinians in Gaza, including women, children and entire families, began arriving at the camps set up by the ‘Higher National Commission for the Great Return March and Breaking the Siege’ at the ‘border’ of the Gaza Strip. Ceremonies were held to honor the work of medical and media staff covering the events of the march. The crowd chanted national slogans and raised Palestinian flags. Hundreds of protesters approached the border fence, some of whom, set fire to tires, and threw stones at the Israeli Occupation Forces (IOF), who were deployed behind the border fence at distances up to 300 meters from the protesting crowds. The protests continued up until approximately 19:30 that day.

On August 31, 2018, between 16:00 and 19:30, peaceful Palestinian demonstrators continued their active participation in the events of the 23rd anniversary of the Great Return March. Thousands of peaceful demonstrators, including women and children, arrived into the five return camps set up in the eastern border areas of the Gaza Strip, to participate in the peaceful return march. The demonstrators waved Palestinian flags and chanted national slogans. Israeli military vehicles stationed behind the border fence fired tear gas canisters towards demonstrators, causing dozens to suffocate from tear gas inhalation. The IOF shot live bullets and tear gas canisters into the crowds of demonstrators, injuring 78, including 16 children. Two paramedics, a woman, a journalist, and a child were amongst the severely injured.

Hundreds of peaceful demonstrators took part in the Great Return March at the border area east of Rafah. The IOF targeted peaceful demonstrators with live bullets, rubber bullets, and tear gas canisters, wounding 17 civilians, including 4 children, with live bullets and shrapnel. Shurooq Fawzi, 23, a volunteer paramedic was critically wounded by a live bullet in the chest and the back. Meanwhile, Palestinian journalist Mohammed Sameeh Hassan Abu Sultan, 23, was wounded by a live bullet in the left leg as he worked on media coverage of the events.

At ​​Abu Safiya hill, east of Jabalya, in the northern Gaza Strip the IOF injured 17 demonstrators, including 5 children and a medic. Of these, 13 were wounded with live ammunition and four by direct gas canisters to various parts of the body. Medic, Mo'in Ibrahim Abdullah al-Masri, 43, was shot in the back by a tear gas canister when a Palestinian Red Crescent ambulance was targeted from the rear, while transferring the injured from the scene.

Hundreds of peaceful demonstrators, including women and children, took part in the events of the Great Return March in the border area of ​​Malaka, east of Gaza City. The Israeli occupation forces fired live bullets, rubber bullets, and tear gas canisters at protesters, injuring 17 demonstrators, including 2 children. Of these, 14 sustained injuries from live bullets and 3 from direct gas canister hits.

The Great Return March continued along the Khuza'a border area east of Khan Yunis. The IOF employed unnecessary and excessive force, injuring 12 people. Amongst the injured, 2 suffered injuries from live bullets and 10 were directly wounded from tear gas canisters.

Protests continued on 7 September throughout the perimeter locations around the Gaza Strip as families gathered to protest against the continued inhumane conditions inflicted on Palestinians from the on-going siege and for their international law right to return to their homelands, from which they fled as refugees in 1948.

At approximately 7:00 am, on 7 September 2018, medical sources at Shifa Hospital in Gaza City announced the death of Amjad Fayez Ahmad Hamdouna, 19 from Jabalya refugee camp. Hamdouna was wounded on 13 July 2018, while he was taking part in the Great Return March in al-Awda refugee camp in Tal Abu Safiya area, in the northern Gaza Strip. He was shot by the IOF, with a live bullet to his left knee, severing the veins in his calf, and causing his bone to splint. Hamdona underwent several surgical operations and received treatment in Makassed Hospital in Jerusalem for two weeks. Afterwards he remained in Al-Shifa hospital in intensive care until his death on 7 September.

On September 7, at approximately 17:50, IOF snipers in the east of Rafah, positioned themselves behind the separation fence, at a distance of approximately 100 meters from the Gaza Strip. Snipers positioned behind the fence, shot Bilal Mustafa Mohammed Khafajeh, 8, with a live bullet in the chest. The child was transferred to the European Hospital in Khan Yunis for treatment. He was pronounced dead half an hour after his arrival at the hospital.

On 7 September, Ahmed Mesbah Ahmed Abu Tayour, 16 was protesting at approximately 100 meters distance of the border fence, at Al-Mawda refugee camp, east of Rafah, in the southern Gaza Strip. Tayour was wounded by a live bullet in the right thigh that cut through the main artery of his leg and varicose veins. At approximately 18:00, he was transferred to the Gaza European Hospital in Khan Younis. Due to the seriousness of his injury, he was admitted to intensive care. The Palestinian Ministry of Health announced his death at 9:00 am on 8 September 2018.

On Friday 7 September 2018, hundreds of peaceful demonstrators participated in the Great Return March, in the border area east of the city of Rafah. The IOF targeted the peaceful demonstrators with live bullets, rubber bullets and tear gas. This resulted in the death of Bilal Mustafa Mohammed Khafajeh, 8, and the injury of 18 Palestinians with live bullets, including 7 children.

Hundreds of peaceful demonstrators, including women and children, took part in the Great Return March in the area of ​​Abu Safiya hill, east of Jabalya town in the northern Gaza Strip. The IOF positioned behind the border fence fired live bullets and tear gas canisters at the protestors, injuring 27 Palestinians including 7 children. Of the injured, 20 were wounded with live bullets, and 7 suffered direct hits by tear gas canisters in different parts of the body. Three of the injured were paramedics including Nabil Mohammed Mahmoud Abu Saqer, 38, who was wounded by a live bullet in the left leg; and volunteers from the Palestinian Red Crescent Fadi Usama 'Abd al-Rahim Ali, 24, wounded with a tear gas canister in the left foot; and Mohammed Ziad al-'Abd Abu Foul, 26, wounded by a tear gas canister in the left shoulder.

Hundreds of peaceful demonstrators, including women and children, participated in the events of the Great Return March at the eastern border of Gaza City. The IOF fired live bullets, rubber bullets and tear gas canisters, at demonstrators injuring 51 people, including 4 children, 46 of whom were injured with live bullets and five of whom were directly hit by tear gas canisters in different parts of the body.

Hundreds of peaceful protesters, who gathered at the border area east of Bureij refugee camp, were fired at by the IOF. Of these, 15 Palestinian protestors were injured, including 4 children, all of whom were wounded by live bullets.

Hundreds of peaceful demonstrators, including women and children, joined the protest at the Khuza'a border area, east of Khan Yunis. The IOF shot at protestors using live fire and tear gas, wounding 9 Palestinian protestors with live bullets, including 4 children and 7 with tear gas canisters directly in different parts of the body.  Ahmed Saleh, 30, a medic with the Civil Defense was wounded with shrapnel from a live bullet in his right thigh, as he worked transferring the wounded, in eastern Khan Yunis.

Al-Haq strongly condemns the IOF’s continued suppression of the Great Return March and warns against Israel’s persistent unnecessary, unnecessary, excessive, indiscriminate and disproportionate use of force against peaceful Palestinian protestors in the Gaza Strip. The continued use of excessive force and killing of peaceful Palestinian protesters, violates Israel’s obligations under Article 6 of the International Covenant on Civil and Political Rights (ICCPR), which provides that “no one shall be arbitrarily deprived of his life”. Furthermore, Al-Haq is particularly concerned about Israel’s continued attacks against journalists and paramedics during the Great Return March, who must be considered as civilians. Al-Haq warns that the killing and maiming of the protected population amounts to a war crime and may be prosecuted as a ‘grave breach’ of the Fourth Geneva Convention.

Al-Haq calls on the international community to take immediate measures to ensure the protection of the right to life, right to health and the right to peaceful assembly and protest of the protected Palestinian population in the Gaza Strip and the rest of the Occupied Palestinian Territory. Al-Haq calls on third States to urge Israel to immediately and unconditionally end the unlawful closure and blockade of the Gaza Strip, including all recent measures of tightening the closure, which amount to collective punishment prohibited by international law. Al-Haq further calls on Israel and third States parties to the Geneva Conventions to respect, protect, and fulfil their obligations to ensure the realisation of the right of return of Palestinian refugees, 70 years since their unlawful forcible transfer and displacement, following the 1948 Nakba.

[2] United Nations General Assembly Resolution 194 was adopted on December 11, 1948, near the end of the 1948 Arab–Israeli War. The Resolution defined principles for reaching a final settlement and returning Palestine refugees to their homes.