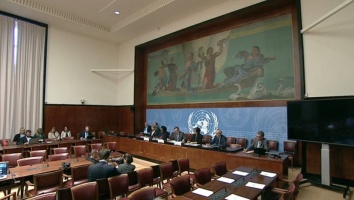 Al-Haq welcomes the report issued today, on Thursday, 28 February 2019, by the independent, international commission of inquiry (the Commission) established by the United Nations (UN) Human Rights Council, in resolution S-28/1 of 18 May 2018,[1] to “investigate all violations of international humanitarian law and international human rights law in the Occupied Palestinian Territory [OPT]… in the context of the military assaults on the large-scale civilian protests that began on 30 March 2018” and “to identify those responsible, to make recommendations, in particular on accountability measures… and on protecting civilians against any further assaults”.[2] Subsequently, commissioners Santiago Canton of Argentina (Chair), Sara Hossain of Bangladesh, and Betty Murungi of Kenya were appointed to the Commission by the President of the Human Rights Council.

The Commission’s findings, as detailed in a preliminary report submitted today to the Council (A/HRC/40/74), largely reflect information documented and submitted to it by Al-Haq and other Palestinian human rights organisations. According to the Commission’s Chair, Santiago Canton, “[t]he Commission has reasonable grounds to believe that during the Great March of Return, Israeli soldiers committed violations of international human rights and humanitarian law. Some of those violations may constitute war crimes or crimes against humanity, and must be immediately investigated by Israel”.[3] Indeed, the investigation found that, between 30 March and 31 December 2018, Israeli soldiers killed 189 Palestinians during the Great Return March protests in the occupied Gaza Strip, and that over 6,000 Palestinian protesters were injured by live ammunition.[4]

The findings confirm that Israeli forces “killed and maimed Palestinian demonstrators who did not pose an imminent threat of death or serious injury to others when they were shot”, violating their inherent right to life.[5] Commissioner Sara Hossain stated: “[t]here can be no justification for killing and injuring journalists, medics, and persons who pose no imminent threat of death or serious injury to those around them.”[6] As such, the Commission concluded that the Israeli army’s intentional use of lethal force against Palestinian protesters may amount to war crimes and crimes against humanity and requested the UN High Commissioner for Human Rights to refer these findings to the International Criminal Court (ICC).[7]

Considering the ongoing nature of the Great Return March, the Commission recommended that Israel, as Occupying Power, realise Palestinians’ human rights and prevent future violations, including by refrain from using lethal force against civilians and ensuring that the Israeli army’s rules of engagement are aligned with international human rights law.[8] In addition, the Commission stressed the urgent need to grant injured Palestinians the right to health, including access to healthcare, by calling on Israel to ensure that all Palestinians injured during the Great Return March are permitted prompt access to hospitals in the OPT, in Israel, or abroad, and to ensure timely access of medical and all other humanitarian workers to Gaza as well as allowing the entry of medical items and equipment into the Gaza Strip. In this regard, the Commission also recommended that “the de facto authorities in Gaza and the Palestinian Authority ensure timely and efficient coordination for the entry of medical supplies and equipment into Gaza.”[9]

Critically, the Commission called on Israel to immediately lift its blockade on the Gaza Strip, and stressed the obligation of “all three duty bearers to comply with their responsibilities and improve the living situation in Gaza.”[10] Finally, the Commission made clear accountability recommendations, including by emphasizing Israel’s obligation to investigate and prosecute the incidents of killings and injury,  to determine if international crimes have been committed, and to ensure effective remedies for those affected. In addition, the Commission reaffirmed the responsibilities of third States parties to the Geneva Conventions (1949) and to the Rome Statute of the ICC (1998) and called on them to “carry out their duty to exercise criminal jurisdiction and arrest persons alleged to have committed, or who ordered to have committed, the international crimes described in the present report”.[11]

Al-Haq welcomes the report of the international commission of inquiry on OPT protests, as it focuses on individual criminal responsibility and on the root causes of the Great Return March, which have called, since 30 March 2018, for an end to Israel’s unlawful closure of the Gaza Strip and the realisation of Palestinians’ inalienable rights, including the right of Palestinian refugees to return, as mandated by international law. We call on Israel and the international community to ensure genuine accountability, in line with the recommendations of the Commission, and to guarantee respect for Palestinians’ rights to life and health in the occupied Gaza Strip. Finally, Al-Haq calls for a renewal of the Commission’s mandate by the UN Human Rights Council at its upcoming 40th Regular Session in March 2019, to ensure that incidents past 31 December 2018 are addressed and remedied, in light of the ongoing Great Return March demonstrations in the occupied Gaza Strip.

[1] Al-Haq, “Al-Haq Attends 28th Special Session of the UN Human Rights Council on the Situation in Palestine, Calls for Accountability” (22 May 2018), available at: http://www.alhaq.org/advocacy/targets/united-nations/1255-al-haq-attends-28th-special-session-of-the-un-human-rights-council-on-the-situation-in-palestine-calls-for-accountability.

[10] OHCHR, “No Justification for Israel to Shoot Protesters with Live Ammunition” (28 February 2019).