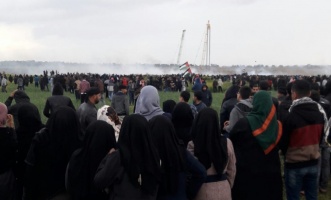 On Thursday, 28 February 2019, the United Nations (UN) Commission of Inquiry established pursuant to Human Rights Council resolution S-28/1 of 18 May 2018, issued a short report including the main findings of its investigation into violations and suspected international crimes committed during the Great Return March protests in the Gaza Strip. On Friday, 1 March 2019, the Great Return March continued for its 49th consecutive week, nearing the one-year mark since its launch on 30 March 2018, marking Land Day.

The UN Commission’s report found what Al-Haq and other Palestinian human rights organisations have been documenting for almost a year: that Israeli soldiers, who have been deployed week after week along the Gaza fence, have used excessive and unlawful lethal force against civilian protesters, killing 189 Palestinians and injuring over 6,000 with live ammunition during the Great Return March in the Gaza Strip in 2018. The Commission concluded that the violations committed by the Israeli Occupying Forces (IOF) may amount to war crimes and crimes against humanity, if committed in the context of a widespread or systematic attack directed against a civilian population, with knowledge thereof, and pursuant to a State policy.

Accordingly, the Commission called for urgent accountability measures, including effective remedies for victims and guarantees of non-repetition. Yet, on Friday, 1 March 2019, the Great Return March continued in Gaza for the 49th week, and the IOF once again suppressed the unarmed civilian protests, injuring 86 Palestinians, including 24 with live bullets and shrapnel. Amongst the injured were 21 children and three paramedics, and three injuries were described as serious, including that of a child.[1]

On Friday, 1 March 2019, the IOF continued its targeting of peaceful protesters and paramedics during the Great Return March protests, which took place between 2:30 pm and 5:30 pm across the five protest locations in the occupied Gaza Strip. As throughout the past months, Israeli soldiers, including snipers, were deployed along the Gaza fence, positioned behind elevated sand hills, in military jeeps, and in watchtowers, some dozens of metres from the fence on the other side.

The IOF shot live and rubber bullets and fired tear gas to suppress the protests, injuring 86 Palestinians. The Palestinian protesters stood some dozens of metres from the fence on the Gaza side, demonstrating once again the IOF’s excessive and unnecessary resort to lethal force against civilian protesters, who posed no imminent threat of death or serious injury to the lives of Israeli soldiers, as found by the UN Commission of Inquiry during previous protest weeks.

According to Al-Haq’s preliminary field documentation, thousands of Palestinians, including women, children, and families, started gathering at around 2:30 pm in the five return camp protest sites set up across the Gaza Strip, raising Palestinian flags and chanting national slogans in the camp areas. Hundreds of protesters, including children, approached the fence by dozens of metres, in plain sight of the snipers deployed on the other side, with the IOF shooting live and rubber bullets and firing tear gas towards the protesters, the gas canisters reaching the return camp areas.

Injury of 86 Palestinians, including 21 Children

In the North Gaza Governorate, hundreds of protesters participated in the 49th Great Return March along the Gaza fence, gathering in Abu Safiya Hill, east of Jabaliya. The IOF shot towards protesters injuring 12, including two who were injured by live bullets and ten with direct gas canister hits; half of the injured were children.

In the Gaza Governorate, hundreds of Palestinian protesters gathered in Malaka, east of Gaza City, where the IOF shot live ammunition and rubber bullets and fired tear gas at the unarmed demonstrators. As a result, 31 protesters were injured, amongst them four children. Of the total, ten were injured by live bullets and shrapnel, eight were shot with rubber bullets, and 13 sustained direct gas canister hits.

In the Central Governorate, hundreds demonstrated east of Al-Breij Refugee Camp in the central Gaza Strip, where 13 Palestinians were injured by the IOF, including three children. One of the injuries was described as serious. Amongst the injuries, four were injured by live bullets and shrapnel, while nine were injured as a result of direct gas canister hits.

In the Khan Younis Governorate, hundreds of Palestinians protested near the fence, east of Khuza’a, east of Khan Younis, where Israeli soldiers also used live ammunition and fired tear gas to suppress the civilian protest. As a result, the IOF injured 13 Palestinians, including four children, with one of the injuries having been described as serious. Amongst those injured, three were injured by live bullets and shrapnel, while the ten others were hit with gas canisters in different parts of their bodies. Two paramedics with the Palestinian Civil Defence were amongst those injured by gas canisters; one was hit by a gas canister in the chest, while another was hit with a gas canister in the left leg.

In the Rafah Governorate, hundreds of peaceful protesters gathered east of Al-Shawka, east of Rafah, where the IOF also used live fire to suppress the demonstrations. As a result, 17 Palestinians were injured, including four children. Amongst the injured, five were injured by live bullets and shrapnel, while the 12 others were hit with gas canisters. One of the injuries involved a gas canister hit to the head and was described as serious. In addition, a volunteer paramedic with the Palestinian Red Crescent Society was injured with a gas canister that hit his left leg.

In addition, dozens of protesters suffered from gas inhalation in all the protest locations and were treated by health workers in the field, while some were taken to hospitals across the Gaza Strip.

“The shooting must stop.” – Ms. Sara Hossain, Member of the UN Commission of Inquiry on the 2018 OPT Protests[2]

Al-Haq echoes calls made by the UN Commission of Inquiry and stresses that urgent action is needed to end Israel’s use of live fire against unarmed civilian protests in the occupied Gaza Strip. Third States parties have a responsibility to ensure respect for international law in the Occupied Palestinian Territory and must, as recalled by the Commission, carry out their duty to exercise criminal jurisdiction to arrest persons alleged to have committed international crimes during the Great Return March.

Critically, Al-Haq stresses that the root causes of the Great Return March must finally be addressed by bringing Israel’s unlawful closure of the Gaza Strip to an end and creating conditions conducive to the realisation of Palestinians’ inalienable rights, including their right to self-determination and permanent sovereignty, and the right of Palestinian refugees to return.

[2] OHCHR, “No Justification for Israel to Shoot Protesters with Live Ammunition”, Press release by the UN Independent Commission of Inquiry on the 2018 OPT protests (28 February 2019), available at: https://www.ohchr.org/EN/HRBodies/HRC/Pages/NewsDetail.aspx?NewsID=24226&LangID=E.