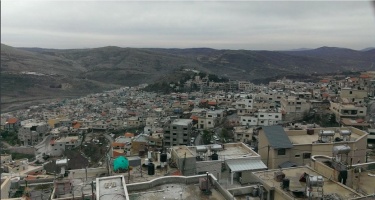 On 25 March 2019, United States (US) President Donald Trump signed a “Proclamation on Recognizing the Golan as Part of the State of Israel.” Prior to that, on 21 March 2019, US President stated that “it is time for the United States to fully recognize Israel’s Sovereignty over the Golan […].”[1] Paving the way to the announcement was the use of the term “Israeli-controlled Golan Heights” in the US State Department’s annual human rights country reports. This marked a change from the 2017 report that referred to the occupied Golan Syrian as “Israeli-occupied.”[2]

Al-Haq condemns the US recognition of the occupied Syrian Golan as part of Israeli territory and recalls United Nations (UN) Security Council Resolution 497 (1981), which held that Israel’s annexation of the occupied Syrian Golan is “null and void and without international legal effect.” Al-Haq stresses that the US decision stands in stark violation of the prohibition against the acquisition of territory through the threat or use of force, and the prohibition on the annexation of occupied territory, as fundamental principles of customary international law. Al-Haq further notes that in 1967, Israel occupied and unlawfully annexed the Syrian Golan from the Syrian Arab Republic, displacing some 130,000 Syrians and razing about 340 Syrian villages and farms.[3]

In December 2017, the US similarly flouted international law, when President Trump recognized Jerusalem as Israel’s capital, contrary to international law governing the status of the city of Jerusalem. In line with its decision, the US moved its embassy to Jerusalem on 14 May 2018, and closed its Jerusalem Consulate in March 2019.[4] It should be further noted that the 2018 State Department report on the West Bank and Gaza also did not refer to the West Bank and the Gaza Strip as occupied by Israel, despite Israel’s prolonged 51-year occupation of these territories since 1967, while the 2017 report cursorily mentioned Israeli military law having been “applied since the 1967 occupation.” The US declaration on Jerusalem was met with widespread protests across the Occupied Palestinian Territory (OPT) and around the world. In addition, the UN General Assembly, in a resolution adopted on 21 December 2017, provided that “any decisions and actions which purport to have altered the character, status or demographic composition of the Holy City of Jerusalem have no legal effect, are null and void”.

Given the escalating alignment of US policy with Israel’s objectives to further its territorial control and settler-colonial project, primarily through its illegal settlement enterprise and annexation measures, Al-Haq underlines deep concerns that the US will also recognize Israeli sovereignty over Area C of the West Bank, as part of Israel, in violation of international law.[7] Notably, the US Ambassador to Israel David Friedman has already stated that unlawful settlements in the West Bank are “part of Israel.”[8] As Israel and the US continue to take actions that stand in stark violation of international law, Al-Haq calls on the international community to take immediate action to end Israel’s unlawful and prolonged occupations of the Syrian Golan and the Palestinian territory since 1967. While public statements made by the European Council[9] and other European countries, including Germany,[10] France,[11] and the United Kingdom,[12] are required and welcome, Al-Haq recalls that third States have a responsibility not only to not recognize the decision as lawful, but also not to render aid or assistance in the maintenance of the unlawful situation, under the law of State responsibility.

Finally, third States must take concrete measures and strong action to bring to an end Israel’s illegal and prolonged occupations of the Syrian Golan and Palestinian territory. States must act in line with their obligations as third Parties to ensure the protection of the occupied Syrian and Palestinian populations and to ensure that their fundamental rights are respected, protected, and fulfilled, including their right to self-determination and to permanent sovereignty over natural resources.On 27 March 2019, the UN Security Council Members “expressedregret” over US decision to recognise Israel’s sovereignty over the occupied Golan. The UN Security Council must explicitly render US decision with respect to the occupied Syrian Golan as null and void, with no legal validity, and to take any action required to counter threats to the maintenance of international peace and security resulting from the US recognition. Should the UN Security Council fail to exercise its primary responsibility in this regard, Al-Haq calls on UN Member States to address the situation in the occupied Syrian Golan at the General Assembly under a uniting for peace resolution, which calls on the US to rescind its decision, and reaffirms that the Syrian Golan remains occupied by Israel, with international humanitarian law applying to the occupied territory and its people.

[12] Reuters, ‘Britain Says it has No Plans to Changes its Stance on Golan Heights’, 22 March 2019, available at: https://www.reuters.com/article/us-usa-israel-syria-britain/britain-says-it-has-no-plans-to-change-its-stance-on-golan-heights-idUSKCN1R32E6?il=0