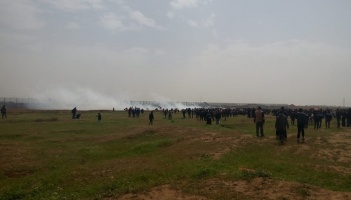 This day last year marked the beginning of the Great Return March protests in the occupied Gaza Strip, on 30 March 2018, during which the Israeli occupying forces (IOF) killed 15 Palestinians as they peacefully called for the realisation of their inalienable rights.[1] 30 March also marks Land Day, annually commemorated by Palestinians since 1976, when Israeli Police killed six Palestinian citizens of Israel as they protested the State’s expropriation of thousands of dunums of their land in the Galilee.[2]

Today, in commemoration of Land Day, Palestinians also mark one year since the start of the Great Return March protests, which have continued on a weekly basis for 52 weeks in the occupied Gaza Strip.[3] Throughout one year of protests along the Gaza fence, Palestinians have called for an end to Israel’s 11-year closure of the Gaza Strip, which amounts to unlawful collective punishment[4] and has made Gaza unfit for human life, as the United Nations (UN) has repeatedly warned.[5] At the same time, Palestinians have been calling for an end to Israel’s prolonged military occupation of the occupied Palestinian territory (OPT), and for the realisation of the inalienable right of Palestinian refugees, who make up the vast majority of the Gaza Strip’s population, to return to their homes and property, as mandated by international law.

Over the past 51 weeks of protests, the IOF have violently suppressed the unarmed civilian demonstrations, systematically and deliberately resorting to lethal and other excessive force to suppress the Great Return March. Since 30 March 2018, Al-Haq has documented the killing of 197 Palestinians within the context of the demonstrations, including 42 children, seven persons with disabilities, three paramedics, and two journalists. In addition, over 29,000 Palestinians have been injured according to the World Health Organization (WHO),[6] including over 6,500 by live ammunition, of whom more than 1,200 have been left with complex limb injuries requiring multiple surgeries and long-term follow up, for which Gaza’s health sector is severely under equipped as a result of Israel’s prolonged closure.

On 18 May 2018, after 58 Palestinians were killed by the IOF in Great Return March protests on 14 May, the UN Human Rights Council adopted resolution S-28/1, deciding to urgently dispatch an independent, international commission of inquiry to investigate all alleged violations and abuses of international law, notably “in the context of the military assaults on the large-scale civilian protests that began on 30 March 2018” in the occupied Gaza Strip.[7] The findings of the independent, international Commission of Inquiry, as submitted to the UN Human Rights Council on 18 March 2019, confirm that “[t]he Commission has reasonable grounds to believe that during the Great March of Return, Israeli soldiers committed violations of international human rights and humanitarian law. Some of those violations may constitute war crimes or crimes against humanity, and must be immediately investigated by Israel”.[8]

Notably, the UN Commission of Inquiry concluded that with the exception of two possible incidents, there were “reasonable grounds to believe that, in all other cases, the use of live ammunition … against demonstrators was unlawful”,[9] while UN human rights experts have stressed that: “[n]o evidence has emerged showing that … a situation occurred during the demonstrations that would make the lethal force used legal”.[10] On 22 March 2019, the UN Human Rights Council adopted draft accountability resolution A/HRC/40/L.25 at the close of its 40th Regular Session, welcoming the UN Commission’s findings and committing to following up on the implementation of the Commission’s recommendations, including to bring to an end Israel’s 11-year closure of the Gaza Strip, with immediate effect, which remains a root cause of the ongoing Great Return March protests.[11]

Al-Haq reaffirms that, within the prevailing climate of impunity and Israel’s utter contempt of international law, the root causes of the Great Return March remain unaddressed, including Israel’s prolonged 11-year closure of the Gaza Strip, which must be brought to an end with immediate effect, its 51-year occupation of the Palestinian Territory, and the denial, for 70 years, to fulfil the inalienable rights of the Palestinian people, including to self-determination, and the right of Palestinian refugees to return, as mandated by international law. Accordingly, Al-Haq reiterates its urgent calls on the international community and the UN to take concrete steps to address the root causes of the Great Return March, starting by immediately lifting the unlawful closure that Israel continues to impose on the Gaza Strip, which has made Gaza uninhabitable.

[6] WHO, “WHO appeals for US$ 5.3 million to respond to trauma and emergency care needs in Gaza”, 18 March 2019, available at: http://www.emro.who.int/palestine-press-releases/2019/who-appeals-for-us-53-million-to-respond-to-trauma-and-emergency-needs-in-gaza.html.

[8] OHCHR, “No Justification for Israel to Shoot Protesters with Live Ammunition”, Press release by the UN Independent Commission of Inquiry on the 2018 Gaza protests (28 February 2019), available at: https://www.ohchr.org/EN/HRBodies/HRC/Pages/NewsDetail.aspx?NewsID=24226&LangID=E.