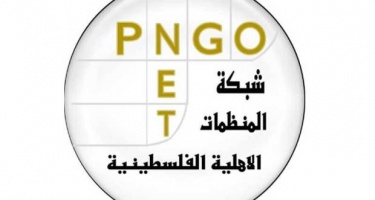 The Palestinian Non-Governmental Organizations Network (PNGO-NET) includes 145 organizations based in the Occupied Palestinian Territory (OPT) that work on issues ranging from development and humanitarian aid to human rights. Our organizations work to address and support the rights of the Palestinian population: rights denied to them as a result of Israel’s 52-year occupation.

One of Israel's key policies has been the unlawful settlement of Palestinian territory, which is characterized by the confiscation of Palestinian land and natural resources, the obstruction of Palestinian movement due to checkpoints, the Annexation Wall, and other barriers, and the use of the OPT as a captive market for Israel. The countless human rights violations that result from Israel's settlement enterprise, ranging from the demolition of homes to targeted killings, are well-documented by the United Nations, and international and local NGOs. There is no question that these acts are unlawful; however, countless UN resolutions and condemnations by third States have led to no change in Israeli policies.

Instead, international businesses have cashed in on Israel's colonization project, and profit from Palestinian dispossession. They borrow sanitizing language from the occupier, and seek to deflect their illegal acts by referring to the OPT as "disputed" territory or highlight the "benefits" of their employment to Palestinians after establishing presence on the very land unlawfully appropriated from them.

The absurdity of this situation was recently highlighted by the actions of Airbnb. The company, which provides rental properties around the world, announced in November 2018 that it would no longer list properties in illegal Israeli settlements in the West Bank. While the decision arbitrarily excluded settlement properties in East Jerusalem and the occupied Syrian Golan, it was largely viewed as a step in the right direction in respecting the human rights of the occupied Palestinian population and towards fulfilling its responsibilities under international law. Perhaps unsurprisingly, Israeli settlers - used to 52-years of impunity - filed suit against the company.

On 9 April 2019, Airbnb announced a reversal in its position as part of its "settlement terms" with the settlers. The company will continue to list the properties of settlers, on unlawfully confiscated Palestinian land, but will donate the profits to NGOs "dedicated to humanitarian aid that serve people in different parts of the world." This policy will be extended to other occupied territories and where "homes...are central to ongoing tensions."

As organizations that respect human rights and human dignity, and work against the oppression, dispossession, and displacement of populations, we underscore that Airbnb donations effectively amounts to the proceeds of crime and will be amassed by the illegal policies and practices we seek to end. We call on all international and local NGOs to reject donations of money from Airbnb, until their policies ensure respect for the human rights of all people, including those living under occupation.

Together, we must all work to end corporate complicity in human rights abuses; companies like Airbnb must know that our silence cannot be bought.