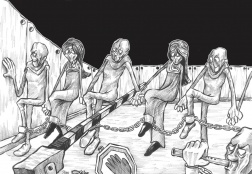 Between 2 to 7 December 2019, Al-Haq attended the eighteenth session of the Assembly of States Parties of the International Criminal Court (ICC) at the World Forum, in the Netherlands. During the week, Al-Haq made two separate and direct interventions to Prosecutor Fatou Bensouda and alongside Al-Mezan and PCHR, and engaged in meetings with staff from the Office of the Prosecutor and the Victims Outreach Unit.

In addition, Al-Haq attended side events on the Asia Pacific Regional Strategy Meeting and Prospects for a formal ICC investigation. There, Rodney Dixon QC, warned that delays by the Prosecutor in opening an investigation into Palestine will have an “effect on rights of victims and the ability to conduct an effective investigation – which does diminish over time, in terms of the detail we can get, it is problematic in ten years time, we have to do it in heat of the moment”. He proposed that the failure to open an investigation into Palestine was emblematic of the wider problem of paralysis within the Court. Professor John Dugard outlined that a reasonable basis to proceed had already been established in the context of Palestine. There was clear evidence of criminality. He suggested that extra-legal political factors were playing into the Prosecutors failure to proceed to investigation.

The Prosecutor spoke directly about the Situation of Palestine. Al-Haq and PCHR presented on Palestinian concerns over the failure to open an investigation after five years. The Prosecutor recognized the frustration of civil society but explained that the week of the Assembly of States Parties represented an artificial timeline and that it was not possible to bring a preliminary examination to investigation to meet such timelines. Nevertheless, she could say that her office was coming to a conclusion on the Situation - there had been a referral and there would be a judicial procedure. Furthermore, she intimated that pressure from the United States would not have any bearing on the work of her office. Al-Haq, Al-Mezan and PCHR welcomed the commitment given by the Prosecutor and urged her to proceed to investigation without any further delays, which may give rise to concerns of politicization.

On 2 December, the State of Palestine and Al-Haq co-hosted a landmark art exhibition “Bringing justice home: from the ICC to the victims in Palestine” featuring the art of the accomplished Palestinian political artist Mohammad Saba’aneh. The artwork depicted the displacement and replacement of the Palestinian people, the widespread and systematic military attacks against the civilian population, unlawful killings of protected persons, a justice system designed to sustain occupation, mass imprisonment, serious infringements on the right to education, a prison of oppression and subjugation, the ongoing blockade of the Gaza Strip and the urgent need for action by the International Criminal Court.

Dr. Susan Power presented for Al-Haq on “Palestine: The Colonial Plan”. Al-Haq reminded that Israel displayed an intention to annex in authorizing the construction of the settlements during belligerent occupation. In 1967, Theodor Meron, then Legal Advisor in Israel’s Ministry of Foreign Affairs warned that ‘in our settlement in Gush Etzion, evidence of intent to annex the West Bank to Israel can be seen’. The colonization is fueled by Israel’s lucrative settlement enterprise. Meanwhile, Palestinian opposition and civil society resistance to the colonization has been systematically repressed through mass incarceration from trials conducted in military courts, based on secret files with administrative detentions decided on unknown security reasons. Israel currently has imprisoned 5000 political prisoners, including 8 member of the Palestinian Legislative Council. In November, Israel arrested leading Palestinian political activist and feminist Khalida Jarrar, silencing any political opposition to the occupation.

In the US, United States National Security Advisor John Bolton, threatened a number of measures that the U.S. intends to take in the event that the ICC “comes after us [the United States], Israel or other U.S. allies”. In light of these threats, Al-Haq calls on the Prosecutor to stand up for Palestinian rights, to ensure that there is no impunity for perpetrators of war crimes and crimes against humanity. Israeli political and military leaders who are carrying out state policies and plans of systematic Palestinian erasure must be prosecuted.

Deliberate Removal of Artwork from the World Forum

On 4 December 2019, the work of Palestinian cartoonist Mohammad Saba’aneh, exhibited outside Europe 1 and 2, at the World Forum, was removed and hidden by unknown actors, without prior permission from the Assembly of States Parties or the World Forum.[1] Al-Haq strongly condemns this act and views with serious concern the fact that such an act took place within the hallways of the Assembly of States Parties of the ICC.

Al-Haq considers this incident the latest in a wider systematic campaign of attacks on Palestinian human rights organizations and activists working to promote and protect the rule of law and human rights of the Palestinian people. Notably, threats and attacks against Al-Haq and other human rights defenders have intensified since the noticeable progress at the level of the ICC and other international mechanisms, with Al-Haq staff members, including its then representative in the Hague, Nada Kiswanson and General Director Shawan Jabarin, receiving death threats in 2016.[2] More recently, the Israeli Ministry of Strategic Affairs launched a campaign of allegations and misinformation on social media against Al-Haq, its staff and General Director, allowing for unfiltered defamatory comments on its public platforms.[3]

Furthermore, it is important to highlight that the policy of silencing human rights advocates has become a trend carried out by the Israeli government, associated groups and institutions. In March 2019, the Report of the Special Rapporteur on the situation of human rights in the Palestinian territories occupied since 1967, noted with particular concern:

“the harmful practices employed by political leadership and States authorities in Israel to silence human rights defenders’ criticism of certain government policies. This includes verbal attacks, disinformation campaigns and de-legitimization efforts, as well as targeting of civil society funding sources… Those accused included respected European and Palestinian organisations such as Al-Haq, the Palestinian Centre for Human Rights and Al- Mezan”.[4]

Al-Haq calls for the necessary investigations to immediately take course and those responsible for this incident be identified and held to account.

Al-Haq will remain steadfast in the face of these attacks and not be distracted or deterred. Al-Haq will continue to document and report on all human rights violations in the OPT, and will seek justice for victims, including through cooperating with the ICC and other available avenues for accountability.

[1] Cartoonists Rights, Accusations of Cartoons “Removed and Hidden” at the Hague, available at https://cartoonistsrights.org/WRMDJ.