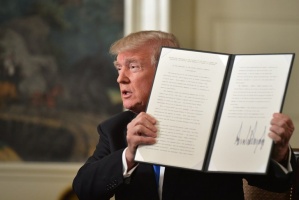 In the fiftieth year of Israel’s unlawful occupation of the West Bank, including East Jerusalem, and the Gaza Strip, Israel continues to significantly alter the legal status, demographic composition, and character of the city of Jerusalem in violation of international law. International consensus over the past seven decades has rejected any claim by Israel to sovereign rights over the city of Jerusalem, and condemned Israeli measures that have sought to alter the character of the Holy City as having no legal validity whatsoever, as reaffirmed by countless United Nations (UN) resolutions.1

United States (US) President Donald Trump broke with this international consensus on 6 December 2017 when he recognised Jerusalem as the capital of Israel and ordered the relocation of the US Embassy from Tel Aviv to Jerusalem. President Trump’s declaration is not only in violation of international law,2 it also deepens Israel’s unlawful annexation of East Jerusalem and its illegal settlement enterprise in and around the city. The US recognition serves to embolden Israel in its violations of international law in the occupied Palestinian territory (oPt). Just last month, the Israeli Ministerial Committee for Legislation scheduled a vote on a bill to unlawfully annex a number of illegal Israeli settlements in the Jerusalem periphery in line with its ”Greater Jerusalem” plan.3

The so-called “Greater Jerusalem Bill”, which was authored by Likud MK Yoav Kisch, is intended to serve Israel’s long-term plan of altering the demographic character of Jerusalem to achieve a 70 per cent majority of Israeli Jews to a 30 per cent minority of Palestinians. The bill seeks to expand the Jerusalem municipality and to include within it the large settlement blocs of Ma’ale Adumim, Giv’at Ze’ev, and Gush Etzion, in addition to smaller settlements. Meanwhile, the bill threatens to sever Palestinian neighbourhoods, including Kufr Aqab, Anata, and Shu’fat refugee camp, from Jerusalem.4 Kisch’s bill, which has received full support from Israeli Prime Minister Netanyahu and others in the Israeli Government, is one of several plans to redraw the borders of Jerusalem, to reduce the Palestinian presence therein, and to bring approximately 150,000 Israeli settlers within the city’s boundaries. Another bill, which seeks to amend for the second time the ‘Basic Law’ on Jerusalem, entered its second and third readings before the Knesset on Monday, 11 December 2017.5 The last amendment to the ‘Basic Law’ on Jerusalem was enacted in 1980 and was censured “in the strongest terms” by the UN Security Council, which called on “[t]hose States that have established diplomatic missions at Jerusalem to withdraw such missions from the Holy City”.6

As a direct result of US pressure, the Knesset Ministerial Committee postponed the vote on the “Greater Jerusalem Bill” in late October 2017.7 However, given the unprecedented shift in US policy in recognising Jerusalem as the capital of Israel this week, the Palestinian Human Rights Organizations Council (PHROC) is deeply concerned that the “Greater Jerusalem Bill” may be tabled once more. Indeed, the enactment of Israeli legislation that seeks to legitimize settlement expansion and the seizure of Palestinian lands amounts to the creation of facts on the ground that may become irreversible, entrenching Israel’s de facto annexation, colonisation, and racial discrimination against the Palestinian people.

US recognition of Israeli sovereignty over Jerusalem, including over occupied East Jerusalem and the settlements therein, must be condemned by the international community, including Member States of the European Union (EU), whose obligation it is not to recognise as lawful any changes to the legal status of Jerusalem and to cooperate to bring to an end violations of international law, including grave breaches, committed in the oPt. Inaction by the EU will only further Israel’s impunity and would amount to silent acquiescence to Israel’s on-going settlement enterprise and its denial of the right of Palestinians to self-determination and permanent sovereignty.

In light of recent developments, PHROC calls on EU Member States to abide by their obligations under international law not to recognise as lawful any attempts to change the character, legal status, and demographic composition of the city of Jerusalem; not to render aid or assistance in the maintenance of Israel’s unlawful settlement enterprise; and to cooperate to bring to an end Israel’s five-decade long occupation. Finally, the EU must take clear and decisive action and exert real pressure on Israel to ensure respect for international law in the oPt.

2 Article 41(2), Draft articles on the Responsibility of States for Internationally Wrongful Acts (2001).

3 The draft bill for the “Jerusalem and Its Daughters” Law - 2017 [5778] (P/20/4109) was introduced by MK Yoav Kisch before the Knesset for preliminary discussion in March 2017. It may be found on the Knesset website at:http://main.knesset.gov.il/Activity/Legislation/Laws/Pages/LawBill.aspx?t=lawsuggestionssearch&lawitemid=2013191.

4 The draft bill for the “Jerusalem and Its Daughters” Law – 2017 [5778] (P/20/4109) calls for the creation of councils for Shu’fat refugee camp, KufrAqab, and Anata. These councils “will be elected by their residents at the time of Jerusalem’s municipal elections [and] will have the authorities and powers determined by the Minister with the approval of the Internal Affairs and Environmental Committee of the Knesset.”