As the world’s largest and most protracted displaced population,[1] Palestinian Refugees and Internally Displaced Persons (IDPs) today number 8.7 Million,[2] constituting 66.7 percent of the Palestinian people. Yet, neither the internationally mandated bodies nor the international community, have taken any measures to adequately address this ongoing Nakba (catastrophe) by the provision of just and durable solutions as stipulated by international law,[3] and as embodied in UNGA Resolution 194 of 1948 and UNSC Resolution 337 of 1967.

The ongoing Nakba is further exacerbated by Israeli policies of forcible displacement and forcible transfer in Mandatory Palestine[6], and significant secondary displacement of Palestinian refugees from historic host countries, such as Syria. Another feature of the lack of international protection is the unequal treatment of Palestinian refugees when compared to other refugee populations as a result of discriminatory policies they are subjected to in many third countries. In this context, it is necessary to emphasize that individual states and the UNHCR are under an international obligation to ensure Palestinian refugees’ entitlement to rights equal to other refugee populations.

Regardless, Palestinian refugees and IDPs continue to call for their right of return. In the Gaza Strip, the “Great Return” marches have been ongoing since 30 March 2018. The demand for the inalienable right of return by the Palestinian population in Gaza has been met with the illegal and excessive use of force by the Israeli military. As of 10 May 2019, 206 Palestinians, including 44 children, have been killed; and nearly 17,000 Palestinians have been injured, including 8,394 wounded by live ammunition by the Israeli forces.[7]  In May 2018, the UN created an independent Commission of Inquiry to investigate Israeli military practices in the Gaza Strip. In summation, the Commission Chair, Santiago Canton of Argentina stated:

“The Commission has reasonable grounds to believe that during the Great March of Return, Israeli soldiers committed violations of international human rights and humanitarian law. Some of those violations may constitute war crimes and/or crimes against humanity, and must be immediately investigated . . .”[8]

In its report, the Commission strongly recommended that the UN and member states activate international justice mechanisms, such as sanctions, the ICC and criminal jurisdiction, to investigate and seek accountability for the perpetrators of the crimes committed.

International complacency vis-à-vis the rights of the Palestinian people - particularly the right to reparations - facilitates the continuation and intensification of the ongoing Nakba. The passivity of the international community impacts those who have already been displaced while simultaneously, encourages further displacement, as Israel continues to enjoy impunity for international crimes. As such, third party states must necessarily and promptly recognize that any just and durable solution to the Palestinian Question must begin with the adoption and implementation of a rights-based approach. Failure to do so will maintain the status quo in which international protection is absent, and in which Palestinians are condemned to additional and more protracted displacement.

[3] Rule 132 of Customary IHL; the Fourth Geneva Convention; Universal Declaration of Human Rights; and the International Covenant on Civil and Political Rights.Basic Principles and Guidelines on the Right to a Remedy and Reparation for Victims of Gross Violations of International Human Rights Law and Serious Violations of International Humanitarian Law, Adopted and proclaimed by General Assembly resolution 60/147 of 16 December 2005, and Declaration of Basic Principles of Justice for Victims of Crime and Abuse of Power, adopted by General Assembly resolution 40/34 of 29 November 1985.

[8] The UN Independent Commission of Inquiry on the 2018 Gaza Protests, “No Justification for Israel to Shoot Protesters with Live Ammunition”, press release, 28 February 2019, available at: https://www.ohchr.org/EN/HRBodies/HRC/Pages/NewsDetail.aspx?NewsID=24226&LangID=E [accessed: 14 May 2019]. 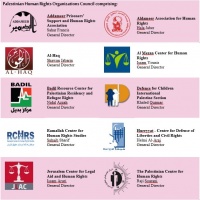