This week a 24-year-old Palestinian man was badly injured after an 8-minute mauling by an army dog during the weekly protest at Kufr Qaddoum. This is the latest in a series of unprovoked attacks by Israeli forces, which have seen army dogs used as a further method in the violent suppression of peaceful protests and house raids, resulting in injuries to Palestinians. 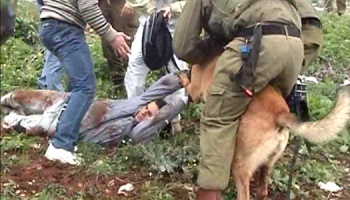 During the second intifada, Israeli forces closed the eastern entrance of Kufr Qaddoum village Qalqiliya governorate forcing the residents to take an 11-kilometre detour to reach the city of Nablus. In July 2011, Kufr Qaddoum’s residents started organising peaceful weekly protests against the closure of the road.

Some 900 villagers and solidarity campaigners attended the protest held on Friday 16 March. The Israeli soldiers attempted to disperse the protestors using gas canisters and sound bombs, often targeting their bodies. They also released two army dogs, one of which attacked Ahmad Shaker Mahmoud Shteiwi, and violently mauled his right hand. The dog did not release Ahmad for eight minutes, despite the efforts of two Israeli soldiers who were trying to take it off.

When Ahmad’s uncle tried to help his nephew he was pepper sprayed and had his hands bound by an Israeli soldier. Ahmad was left with deep cuts on his hand and bruises all over his body.  The soldiers also arrested Ahmad and his uncle and at the time of publishing this document, they are still in detention. (Al-Haq affidavit 7149/2012)

On Friday, 3 February 2012, Akram Jamal Hanatsha, 20 years old, was attacked by an army dog during an incident near his home in Doura village (Hebron governorate). When Akram’s father, Jamal, was informed of the attack he rushed to the scene in time to see an army dog mauling Akram’s right shoulder. At the same time, two Israeli soldiers were kicking Akram and beating him with their rifles’ butts. Other soldiers either stood and watched or used tear gas and sound bombs to prevent residents of the village from approaching.

While on the ground and struggling against his attackers, Akram kicked one of the soldiers who then fell to the ground. The soldier picked up a rock and threw it at Akram’s head. Another two soldiers then came and joined in the beating of Akram. The attack continued for a further 15 minutes, until a military ambulance, and later a Palestinian Red Crescent ambulance, arrived at the scene and provided Akram with medical assistance.

At around 3:00 pm, Akram was taken away by the Israeli paramedics. Jamal was informed that his son had been taken to a hospital in Be’er Sheva. Later that evening, Akram called his father to tell him that his skull was fractured and he had to undergo surgery. Jamal applied for a permit to visit his son in hospital in Israel but had to wait a week before he was allowed to see him. Before being discharged from the hospital, Akram’s room had been guarded by two Israeli soldiers at all times even if at no stage was he questioned or charged with any crime. (Al-Haq Affidavit 7052/2012)

As reported in a previous Weekly Focus, 47-year-old Amira Rahman ‘Awad was attacked by an army dog during the arrest of her son in December 2011. She was mauled for five minutes, lost consciousness and suffered nerve damage in her arm.

When Ahmad’s uncle tried to help his nephew he was pepper sprayed and had his hands bound by an Israeli soldier. Ahmad was left with deep cuts on his hand and bruises all over his body.  The soldiers also arrested Ahmad and his uncle and at the time of publishing this document, they are still in detention. (Al-Haq affidavit 7149/2012)