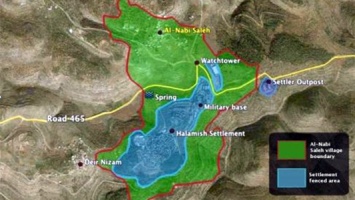 Since December 2009, the residents of al-Nabi Saleh (Ramallah governorate) have been carrying out peaceful demonstrations every Friday to protest the ‘Halamish’ settlement’s appropriation of their land and spring water. In response, the Israeli army has regularly resorted to excessive and disproportionate use of force against peaceful demonstrators, carried out numerous night-raids and arrested countless participants in the protests in an attempt to discourage such demonstrations. Several homes were raided and three residents arrested during an Israeli military operation last week. The arrested were: Ziad ‘Abd-al-Raziq al-Tamimi (24 years old), Muhammad ‘Atiyya al-Tamimi (28 years old) and ‘Omar Saleh Dar-‘Ayoub (26 years old). ‘Omar was injured by several rubber-coated metal bullets, fired at short range, and lost consciousness. He was then detained and assaulted while unconscious by Israeli soldiers, who also prevented the Palestinian Red Crescent Society paramedics from providing prompt and appropriate medical assistance to ‘Omar.

On 11 September, at approximately 2:30 am, the Israeli army raided al-Nabi Saleh. Subsequently, at approximately 3:15 am, some residents, including ‘Omar Saleh Dar-‘Ayoub, began throwing stones at the Israeli soldiers while they were withdrawing from the village. In response, the soldiers fired live ammunition, rubber-coated metal bullets, tear-gas and sound bombs.

The residents were following the Israeli army, when they arrived at the al-Khawaja petrol station, located at the entrance to the village, and found a group of Israeli soldiers hiding behind the station. The soldiers began firing rubber-coated metal bullets at them from a distance of approximately ten metres. ‘Omar was hit by several bullets in his abdomen and legs. He then ran towards the village, reached ‘Abd-al-Raziq al-Tamimi’s home, and fell to the ground.

Iyyas, who witnessed the incident, immediately went to help his cousin ‘Omar. Iyyas found him lying on the ground unconscious with three bleeding wounds in the abdomen and called an ambulance. (Al-Haq Affidavit No. 7725/2012)

Approximately 30 minutes later, a Palestinian Red Crescent Society ambulance arrived at the scene of the incident. Ma’en Muhammad Raddad, one of the two paramedics, transferred ‘Omar into the ambulance while Iyyas entered beside the driver. Ma’en examined ‘Omar and concluded that the bruises on Omar’s abdomen had been caused by rubber-coated metal bullets, but he could not assess the full extent of ‘Omar’s injuries.

However, the ambulance was prevented from leaving the village by a white, civilian car, from which three Israeli soldiers emerged. The soldiers ordered Ma’en to remove ‘Omar from the ambulance.

Subsequently, the soldiers began punching ‘Omar on the head while insulting him. ‘Omar remained unconscious during this time, despite the fact that the soldiers poured some water over him. The soldiers said that they would bring ‘Omar with them but the paramedics refused to hand over their patient. The soldiers then ordered the paramedics to follow them to the nearby military base, which is attached to ‘Halamish’ settlement.

In the meantime, the Israeli officer in command asked Iyyas if he knew ‘Omar. When Iyyas replied that he was his cousin, the officer assaulted him, choking, punching and kicking Iyyas. The soldiers then cuffed Iyyas’ hands behind his back and put him into the white car. The ambulance left the village and followed the soldiers to ‘Halamish’ military base.

Shortly thereafter, the ambulance arrived at the entrance to the military base, where a military doctor performed a brief examination on ‘Omar’s condition and then told the soldiers that they could arrest him. (Al-Haq Affidavit No. 7730/2012)

Meanwhile, the soldiers dragged Iyyas out of the car, blindfolded him and began beating him. Iyyas was detained until 5:00 am and then released without knowing his cousin’s whereabouts.

On Wednesday 12 September, Iyyas was informed that ‘Omar was arrested and detained in ‘Ofar prison. Following the arrest, ‘Omar was charged with throwing stones and three hearings have already taken place. The lawyer saw ‘Omar during the last two hearings but was not given detailed information concerning ‘Omar’s health condition. The lawyer asked the judge to provide him with ‘Omar’s medical report, which should be presented during the next hearing.

Al-Haq condemns the disproportionate use of force used by the Israeli soldiers against the residents of al-Nabi Saleh. In addition, Al-Haq expresses its grave concern at the restrictions posed on the ambulance paramedics who were prevented from offering adequate medical assistance to ‘Omar. Finally, Al-Haq is outraged by the physical assault of an unconscious man, as well as the blindfolding and beating of a detained person.

For further information on the violent suppression of the protests in al-Nabi Saleh, see also, Repression of Non-Violent Protest in the Occupied Palestinian Territory: Case Study on the village of al-Nabi Saleh