Main Menu
Israeli Setters Chop Down Some 1,155 Palestinian Olive Trees in ‘Awarta
Latest Topics
CLAIHR and Al-Haq Seek Leave to Intervene in the Kattenburg v Canada Case on Labelling of Illegal Settlement Products
PHROC condemns the arrest of human rights defender Mahmoud Nawajaa
Palestinian Disability and Human Rights Groups Submit to the UN Committee on the Rights of Persons with Disabilities for its List of Issues on Israel’s Initial Report
Al-Haq Visits the Detainees Arrested for Preparing to Participate in a Peaceful Protest, in the Palestinian Police Center of Ramallah and Al-Bireh
Al-Haq Highlights Israel’s Illegal use of Collective Punishment at the 44th Regular Session of the UN Human Rights Council
Palestinian Civil Society Organisations Welcome the Report of the Special Rapporteur addressing Israel’s Collective Punishment Policy
Israeli Setters Chop Down Some 1,155 Palestinian Olive Trees in ‘Awarta
- 8-14 July - Ref.: 130/2013
18، Jul 2013 During the past week, Al-Haq’s documentation revealed continued Israeli settler attacks against Palestinians, their property and their sources of livelihood in the West Bank, including the destruction of olive trees and livestock. On 12 July, settlers in occupied east Hebron uprooted numerous vegetable beds belonging to Palestinian farmer ‘Ata ‘Abdul-Jawad Jabir, justifying their actions by claiming that ‘Ata’s land has been declared ‘State land’ by Israel.

On 12 July, a group of settlers chopped down 32 olive trees in Khirbet al-Tira, in Nablus governorate. 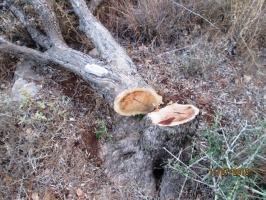 At 5:00 am on 11 July, Sami, Iyad N’am ‘Awwad, 37, and another two farmers drove to the land where the trees had been cut down. According to Iyad, a teacher whose olive trees had been destroyed by the attack, the area where the trees were chopped down is isolated from the rest of the village, separated from it by two security fences erected by ‘Itamar’ settlement. Palestinian farmers are only allowed to access their land in this area once a year during the olive harvest for a maximum of two days. The scheduled days are determined by the Israeli authorities without consultation, and are thus often not suitable for the farmers and do not allow enough time to complete the work needed to care for their crops.

The four farmers had reached as far as Hijafa, an area part of ‘Awarta’s lands, located next to their own land where the trees had been cut down, when they saw two military jeeps and an Israeli Civil Administration vehicle. Ten armed Israeli soldiers stepped out of the jeeps, checked their identity cards and permitted Sami and the other three farmers to access their land.

Throughout the tour, Iyad, who understood that only 300 olive trees were cut down, realised that, in fact, approximately 1,155 olive trees belonging to 23 Palestinian families had been chopped down. Some of the olive trees, which were about 100 years old, had been sliced from the tree trunk by using a sharp machine. The parts of the trees that had been cut off were dried out and looked like they had been cut about a month earlier. The visit lasted for about an hour, when Iyad, Sami and the others returned to the village.

Sami recalls that the municipality had received an order of land confiscation of about 63 dunums (one dunum equals 1,000 m²) from the lands of ‘Awarta in June 2013. The order included maps and aerial photos of the locations that were planned to be confiscated. The map showed that the real amount of land to be confiscated was over 1,000 dunums of lands and it included the place where the olive trees had been chopped down. 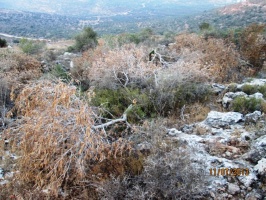 Investigations of such incidents by the Israeli authorities remain insufficient to a degree that amounts to systemic failure to prevent or punish criminal behaviour, thereby implicitly sanctioning further attacks. These acts of violence and harassment perpetrated by Israeli settlers against Palestinians aim to consolidate the Occupying Power’s policy of forcible transfer and land confiscation, with the objective of expanding Israel’s illegal settlement enterprise, fostering its economy and strengthening its control over Palestinian natural resources.

Since the ruling of the Advisory Opinion of the International Court of Justice nine years ago, almost to the day of the attack on the 1,155 olive trees, Israel still refuses to fulfill its international obligations. As an Occupying Power, Israel has a legal responsibility to protect the occupied population and its property; however, Israel continues to expand its illegal settlements in the West Bank and to create an atmosphere of impunity enjoyed by settlers that ultimately serves Israel’s purposes of annexing more Palestinian lands.