In October 2019, Israeli Occupation  Forces (IOF) killed three Palestinians. Of these, two were killed in the Great Return March (GRM) protests and one at a checkpoint in Tulkarem:

Ala’ Nizar Hamdan, 28 years old: At about 4:35 pm on Friday, 4 October 2019, IOF, positioned behind the perimeter fence and around military jeeps, fired live ammunition, rubber-coated steel bullets, and tear gas canisters on dozens of protestors, including young people and children, opposite the Abu Safiyyah border gate east of the Jabalya town in northern Gaza. As a result, Ala’ Hamdan, a resident of Beit Hanoun, sustained a bullet wound in the chest. Hamdan was transported by an ambulance of the Palestine Red Crescent Society (PRCR) to a trauma stabilisation point behind Al-Awda camps. For half an hour, doctors attempted to revive Hamdan, but to no effect. At around 5:05 pm, Hamdan was transported to the Indonesian Hospital in Beit Lahiya and admitted to the intensive care unit. About 15 minutes later, doctors pronounced him dead. Hamdan was injured while he was standing 70-80 metres away from the perimeter fence and did not pose a threat to the lives of Israeli soldiers. He was married and a father of a 3-year-old girl.

Fadi Osama Hijazi, 20 years old: At around 12:30 pm on Monday, 7 October 2019, the Palestinian Ministry of Health (MOH) in Gaza announced the death of Hijazi, a resident of Beit Hanoun, of injuries sustained earlier during his participation in the GRM protests. On 22 February 2019, Hijazi was injured for the first time. He sustained a bullet wound with entrance and exit in the thigh east of the Al-Awda camp in Abu Safiyyah area, east of Jabalya in northern Gaza. In addition to vein lacerations, Hamdan suffered injuries to his tendons and arteries. At the time, his health condition was diagnosed as critical. He stayed at the Al-Shifa’ Hospital in Gaza City for several days and suffered from an acute haemorrhagic stroke. On 19 April 2019, for the second time, Hijazi sustained a bullet wound in the right knee in the Al-Awda camp east of Al-Bureij refugee camp, resulting again in vein lacerations as well as injuries in his tendons and arteries. He was then transported to the Al-Aqsa Martyrs Hospital in Deir al-Balah. Due to his critical health condition, however, he was relocated to the Al-Shifa’ Hospital in Gaza City.

Ra’d Majed al-Bahri, 25 years old: At about 7:30 pm on Friday, 18 October 2019, IOF positioned at the Jubara checkpoint opened fire on Al-Bahri, a resident of the Kafr Zibad village. Al-Bahri was killed after he had approached the checkpoint, where the IOF prevents Palestinians from crossing on foot. Soon thereafter, a PRCS ambulance arrived, but the IOF forced it to stop 300-350 metres away from the place where Al-Bahri had fallen on the ground, and refused to allow it to proceed further. A white ambulance of the Red Star of David arrived at the scene about 10 minutes after the incident. However, the IOFs also prevented the ambulance from approaching the victim. Almost two and a half hours later, an Israeli ambulance arrived and transported the dead body to an area inside the Green Line. Having reported Al-Bahri’s death to the Palestinian District Coordination and Liaison Office, the IOF has continued to withhold Al-Bahri’s body.

As at the end of October 2019, a total of 95 Palestinians, including 20 children, were killed by the IOF in 2019. Of these, 32 Palestinians were slain in the context of the GRM protests.

In October 2019, the IOF demolished 14 structures, including eight homes, five livelihood structures, and one public facility. 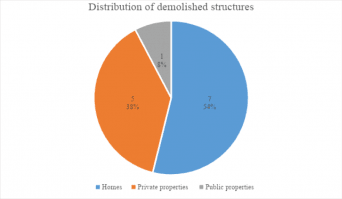 Homes: Citing the lack of Israeli-issued building permits, the IOF demolished eight homes in October. Of these, one was destroyed on punitive grounds. Seven of the affected homes were demolished early in the morning or after midnight. Six of the targeted homes were located in Area C, so designated under the Oslo Accords, one within the municipal borders of Jerusalem, and one in Area A. In one incident, a home was demolished by the Israeli municipality of Jerusalem. The IOF demolished another home on punitive grounds. In all the remaining cases, demolitions were carried out by the Israeli Civil Administration (ICA). In three instances, home owners were not allowed an opportunity to evacuate their belongings from their homes before the demolitions were carried out. One family home was demolished for, at least, the second time. While four homes were inhabited, four were still under construction when they were demolished. Demolitions resulted in the displacement of 17 Palestinians, including nine women and four children. Displaced persons included 11 Palestinian refugees. 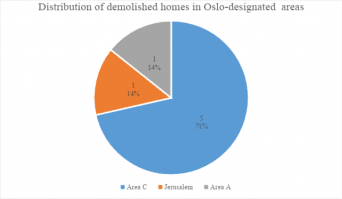 Public facilities: In Dhahr al-Malih in the Northern Jordan Valley (Area C), the IOF confiscated a barracks used as a school canteen. Together with its contents, the barracks was seized early in the morning on a school day. Given the fact that the Israeli occupying authorities rarely grant Palestinians building permits, Palestinians have no choice but to build their structures without permit in Area C and East Jerusalem.  That said, the barrack was confiscated on the basis of lacking such a permit.

As of the end of October 2019, a total of 267 structures were demolished. These included 123 homes, 132 livelihood structures, and 12 public facilities.

During the month of October 2019, the IOF committed numerous other violations. Of these, Al-Haq documented 78 Israeli abuses, including 19 committed by Israeli settlers. With the majority taking place in the Nablus governorate, a large number of attacks targeted farmers while they were harvesting olives. Israeli settler violations against Palestinians and Palestinian properties usually escalate during the olive harvest season.

Of particular note, on 26 October 2019, the IOF shot 15-year-old Ibrahim al-Satri with a live bullet in the back that exited from the upper chest. Al-Satri was participating in the GRM protests east of the Khuza’a town in the eastern Khan Younis governorate.

Since the GRM protests began on 30 March 2018, a total of 195 injuries have resulted in limb amputations or permanent disabilities among Palestinians.

During October 2019, Al-Haq documented 102 violations committed by the PA in the West Bank and the de facto authority in the Gaza Strip. Reported violations mainly included violations of the right to freedom of expression (17), ill-treatment (6), right to humane conditions of detention/imprisonment (8), arbitrary detention (14), and beating or torture during various phases of detention (6).

Human rights abuses were primarily perpetrated by the Preventive Security (27), Public Prosecution (27), Police in both the West Bank and the Gaza Strip (30), and Internal Security (23).

One of the most prominent violations reported in October 2019 was the blocking of 59 news websites and Facebook pages. At the request of the Attorney General, the Ramallah-based Court of Conciliation rendered a decision on the blocking of these sites on 17 October 2019. Based on Article 39 of the Cybercrime Law by Decree No. 10 of 2018, websites were allegedly blocked because they had published images, articles and expressions that jeopardised the Palestinian national security and public order.

In the Gaza Strip, following calls for protests, the de facto authority continued to prosecute young activists of the “We Want to Live” movement. In October, Al-Haq documented cases where activists were summoned and detained by security agencies. Of these, many were subjected to torture and cruel treatment while being detained in substandard conditions. Al-Haq documented the detention of at least seven activists against the backdrop of this movement.