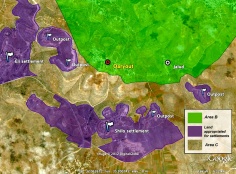 During January 2012, Al-Haq’s field researchers documented more than 15 incidents of settler violence across the West Bank. However, a sharp increase in violence has seen this figure already matched in the first half of February. The current frequency of attacks is close to the high level of documented incidents during last year’s October olive harvest (see interactive map). Settler violence has become a common aspect of life for tens of thousands of Palestinians, a situation exacerbated by the impunity granted to the perpetrators by the Israeli authorities. 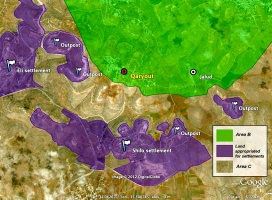 On 6 February at around 2.30 pm, a group of settlers from Shilo settlement, aided by the settlement’s private security guards uprooted and stole 150 olive saplings from Qaryout village. The saplings were planted on 3 February as part of the villager’s defiance against the settlement’s encroachment on their lands. During the protest the residents also reopened the southern road of the village, which had been closed since the beginning of the second intifada. The Israeli authorities claim that this closure was for the protection of the Shilo settlers. (Al-Haq Aff. No. 7043/2012)

Qaryout village is located to the south of Nablus and is hemmed in by two settlements and three outposts (see map). The residents can only build on the small portion of the village’s land that is located in Area B. The rest of the land has either been appropriated by Israeli authorities for the settlements or is located in Area C, where the permits required to build are almost impossible to obtain.

On 9 February 2012, at around 10:00 pm, a group of 20 settlers attacked the home of Yaser Husein ‘Umran, a Palestinian resident of Bourin, a village south of Nablus.

Settler attacks on the villagers and their property have become a common occurrence for most residents. When Yaser heard the stones hitting his home he went to the roof to see exactly what was happening. He saw settlers hitting his home who then began to target him directly, forcing him to hide behind a wall. He noticed that the home of his neighbour, 30 meters to the east, was also under attack by another, larger, group of settlers.

After around half an hour of stone throwing, several Israeli military jeeps arrived. At the same time, a group of 30 young residents came to try to stop the attack. The Israeli soldiers removed the settlers and stopped the villagers from approaching Yaser’s house. While there was limited property damage resulting from this incident, the psychological effects of the attack still weigh on the family. After the incident, Marah, Yaser’s seven-year-old daughter was terrified and asked her father to move from their home and away from the persistent violence. (Al-Haq Aff. No. 7046/2012)

Also this week, the residents of Bourin were told that their mosque could no longer issue its call to prayer. The Israeli authorities ordered that the lights and speakers be removed from the mosque as they had received complaints from the nearby settlement and outpost.