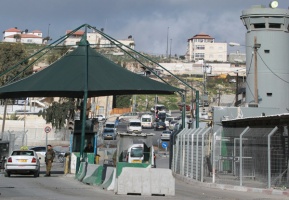 The town of ‘Anata is located about four kilometers northeast of the city of Jerusalem and is separated from the adjacent Israeli military camp of ‘Anatot by the Annexation Wall, which contains two watchtowers with military presence therein. According to residents of ‘Anata, Israeli military training takes place on a daily basis in and around the camp, from the early morning hours through the afternoon. ‘Anata residents have become used to hearing ammunition being fired from that area as a part of the routine military training.

With constant military presence around ‘Anata, including soldiers manning the ‘Anata – Shu’fat checkpoint, ‘Anata residents feel insecure and fear for their children’s lives. In a particularly prominent case in January 2007, ten-year-old ‘Abir Bassam ‘Aramin was shot in the head and killed by Israeli border police while on her way to buy sweets with her friends after a math exam. At the time, the Israeli border police denied their involvement, but ‘Abir’s family successfully brought a case in the Jerusalem District Court proving that it was indeed the border police who had fatally shot her and that Israel was responsible for her death.

On 25 October, four-year-old Asil Mahmoud ‘Ara’ra was shot in the neck while she was playing about a hundred meters away from the Wall. Asil was first taken to the emergency centre in ‘Anata, but her injury was too severe and doctors were unable to treat her and called for an ambulance. The ambulance was unable to enter through the ‘Anata – Shu’fat checkpoint due to traffic and the failure of Israeli soldiers to facilitate its entry. Several minutes later, Israeli soldiers finally allowed Asil’s grandmother and a nurse from the clinic to carry Asil across the checkpoint into the waiting ambulance (see Al-Haq Affidavit No. 6764/2011).

The ambulance transferred Asil to al-Maqased Hospital in the Mount of Olives where she underwent an hour-long surgery.  Doctors found that her spinal cord had been severed at the fourth and fifth vertebra as a result of her gunshot wound, leaving her paralyzed from the neck down. According to the doctors the bullet that hit Asil came from an automatic machine gun (see Al-Haq Affidavit No. 6766/2011).

After the incident, Asil’s family called Israeli police and requested an investigation into the incident.  The police refused to enter the area saying that it is the military’s responsibility to conduct investigations in ‘Anata. Five days later, the military deployed a special unit to investigate the incident but no conclusions have been reached yet. Investigations by the Israeli authorities into such incidents are often not pursued in a prompt, effective and impartial manner and are accordingly plagued by severe shortcomings in the execution of justice (see Al-Haq Field Report on the Shooting of Asil Mahmoud ‘Ar’ara).

An Israeli police officer summoned Asil’s uncle, Yihiya Mousa ‘Ara’ra for questioning and tried to convince him that Asil had either been hit by firecrackers or had been shot by a member from another family in disagreement with hers. Yihiya explained that his family is not in disagreement with any other family in the town and that little girls would never be targeted in family feuds. He strongly calls for a proper investigation (see Al-Haq Affidavit No. 6766/2011).