The village of ‘Azzoun ‘Atma is located approximately 12 km south the city of Qalqiliya in the north of the West Bank and has a population of about 2,000 Palestinians. Since 2002, Israel has appropriated approximately 500 dunums (one dunum equals 1,000 m2) of land for the construction of the Annexation 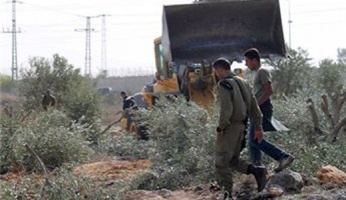 Wall, uprooting more than 1,500 olive trees in the process. Furthermore, some 2,000 dunums of land to the south of the village are now inaccessible to all villagers except for 90 people living in seven houses which are separated from the remainder of the village by the Wall. These 90 people are only able to access the village through “Yo’af” gate in the Wall, but they have to obtain special permits from the Israeli Civil Administration in order to cross the gate.

In addition, ‘Azzoun ‘Atma is surrounded by three settlements and the villagers suffer from regular exposure to raw sewage originating from the settlement located to the northeast, Sha’arei Tikva. The sewage regularly spills onto the village’s school playground, Beit Amin High School, preventing regular schooling and exposing students to health risks.

On 13 and 14 November 2011, the Palestinian farmer ‘Ali Yousef saw 40 Israeli soldiers, accompanied by two military bulldozers, seven military jeeps and eight workers, levelling the area of Khalet al-Masaya, located one kilometer west of ‘Azzoun ‘Atma, near Oranit settlement. The workers cut down almost 80 olive trees, which were then uprooted by the bulldozers. By the end of the second day, approximately 30 dunums of land were levelled.

When ‘Ali asked an Israeli officer for the reason behind bulldozing his land and the land of the other villagers, especially considering that there is already a fence separating the area from the settlement, he was told that there is a 2007 Military Order to confiscate land belonging to ‘Azzoun ‘Atma and other villages in order to construct the Wall, protecting Oranit settlement and allowing for its safe expansion, the soldier added. (AL-Haq Affidavit no. 6792/2011).

As a direct result of the continued construction of the Wall, the village of ‘Azzoun ‘Atma will be eventually dispossessed of further 500 dunums of its land and approximately 40 Palestinian farmers will lose their groves, planted with olive and citrus trees and containing several greenhouses, which are essential for their livelihood.