During last week, a wave of mounting tension and violence spread throughout the West Bank, where numerous incidents of settler violence, including acts in pursuit of the ‘Price Tag’ policy, were carried out. The ‘Price Tag’ policy commonly refers to the settlers’ strategy of violence towards Palestinians and their property in retaliation of any action taken by the Israeli authorities affecting the settler community in the West Bank. However, some of the incidents that occurred last week were specifically in response to the attacks launched from the Gaza Strip on Tel-Aviv and Beer Sheba during the last escalation of violence in the Gaza Strip between 8 and 21 November 2012.

Al-Haq documented one incident of settler violence in the Hawwara area, east Yatta (Hebron governorate) and two incidents in ‘Ourif village (Nablus governorate), which has been facing unrelenting attacks at the hands of Israeli settlers from the nearby ‘Yitzhar’ settlement. 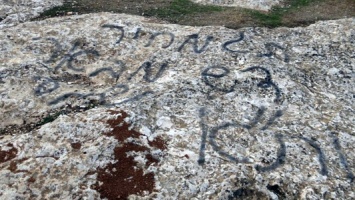 Jamil Khalil Houshiyyah owns 200 dunums (one dunum equals 1,000 m²) of agricultural land in East Yatta (Hebron governorate), cultivated with almond and olive trees. On 24 November, at approximately 3:00 pm, Mohammad Ibrahim al-‘Athra, a neighbour, informed Jamil that several of his trees had been destroyed. Jamil immediately headed towards his land and discovered that some 400 almond and olive trees had been vandalised; these had had their trunks and branches cut off, while some were completely destroyed. Jamil found Hebrew writing on the stones next to some trees, which read: “pay the price for hitting Beer Sheba and Tel-Aviv.” This ‘Price Tag’ incident clearly referred to attacks from the Gaza Strip on these two Israeli cities during the last escalation of violence in the Gaza Strip.

Subsequently, Jamil called the Israeli police and, at approximately 5:30 pm, an Israeli military patrol arrived at his property to investigate the incident. The preliminary investigation led the Israeli army to suspect that settlers from the ‘Karma’el’ settlement, which is approximately one kilometre east from the Hawwara area, were responsible for the incident. The Israeli patrol left the site at approximately 8:00 pm. At the time of writing, no developments on the case have been reported. (Al-Haq Affidavit No.7871/2012)

During the same week, another village in Nablus governorate, ‘Ourif, was the target of two incidents of settler violence. ‘Ourif village is located at approximately 700 metres from ‘Yitzhar’ settlement. During this and last year, settlers from ‘Yitzhar’ have attacked the Palestinian village on several occasions. Between May and November 2012, Al-Haq documented five settler attacks against ‘Ourif and its residents, including burning of olive trees, stone-throwing at the boys secondary school of the village, and shooting at Palestinian youth.

On 19 November, at approximately 4:30 am, ‘Abd-al-Rahim Mahmoud Safadi (54 years old), a resident of ‘Ourif village (Nablus governorate), was awoken by one of his neighbours, Rajeh Husein Safadi, who informed him that their village mosque had been set ablaze. Immediately, ‘Abd-al-Rahim ran towards the mosque. Upon arrival, he saw carpets and rags on fire in front of the mosque’s main entrance, which was already caught in the blaze. He also identified two plastic bottles (of two litres capacity) burning next to the rags. ‘Abd-al-Rahim headed towards the water well next to the mosque to pump water to extinguish the fire, but realised that the pump’s engine had been deactivated. In the meantime, Rajeh came back from his home with plastic containers filled with water. The two men began pouring water over the carpets and the mosque’s main entrance. After 15 minutes, they managed to extinguish the fire.

At approximately 8:00 am, some 15 Israeli soldiers arrived at the site of the incident. Shortly after, clashes between ‘Ourif residents and the Israeli soldiers erupted. The Israeli military fired tear gas against youth who were throwing stones at them. The Israeli soldiers also fired bullets in the air in order to disperse the residents. At approximately 9:00 am, an Israeli police patrol and another five Israeli military patrols arrived at the mosque. Four police officers took the plastic bottles which allegedly contained flammable material used to set the mosque on fire, interrogated Rajeh and took some pictures of the mosque. The clashes continued until 10:00 am when the Israeli army and police finally left the village. The ‘Ourif residents suspect that settlers from ‘Yitzhar’ are responsible, as the village has been subject to continuous assaults during the previous months. (Al-Haq Affidavit No. 7872/2012)

On 22 November, at approximately 3:30 pm, a group of settlers from ‘Yitzhar’ settlement arrived at the boys secondary school, located on the eastern side of ‘Ourif, and began throwing stones. Fortunately, no students were present at the time of the attack.

This attack immediately triggered clashes between settlers and the Palestinian youth of the village. Shortly after, five Israeli soldiers arrived at the school and fired several sound bombs and tear gas canisters at the Palestinians. The clashes lasted until sunset without any injuries reported.

On 25 November, at approximately 7:30 am, students of the school found numerous tear gas grenades and sound bombs inside the school and in its proximity. The students picked up the explosive canisters, without knowing whether they had exploded or not, thereby running the risk of getting severely injured. The students brought the bombs to the director of the school, who immediately called the Palestinian police. Shortly after, Palestinian police officers arrived at the school and removed the explosive devices. It is not the first time that students find explosive canisters in the aftermath of settler attacks against the village.

Al-Haq condemns all incidents of settler violence and acts in pursuit of the ‘Price Tag’ policy. Al-Haq further urges Israel to bring to an end its persistent policy of granting impunity to settlers, whose violent acts endanger the safety and livelihood of the Palestinian civilian population. As the Occupying Power of the OPT, Israel has to abide by its legal obligations under international law.

Israeli authorities are obliged to protect the Palestinian population and prevent attacks against them from settlers, including by holding perpetrators legally responsible for acts of violence and incitement. In all cases, Israel is also under an obligation to adopt effective legal remedies to compensate victims for the bodily harm and property damages suffered.