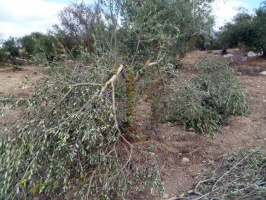 In the first week of the olive harvest, Al-Haq documented several settler attacks on Palestinians and their olive trees across the West Bank. Such attacks deny Palestinians safe access to their lands and deprive them of a key source of annual income.

On 4 October in Jamma'in village, south of Nablus, two settlers destroyed a private vehicle belonging to Ibrahim Abed al-Rahman while he was picking olives on his land with his wife and son. Approximately 15 minutes after the family reached their land, Abed’s son, Akram, heard a noise coming from the vehicle and saw a settler hitting the car window with a stick. When Abed and Akram reached the car they found that all the tyres were punctured and the windscreen and front left window were broken.

On 5 October, in the village of Deir Sharaf in Nablus, local residents discovered that part of the olive harvest had been stolen and approximately 100 olive trees were damaged. Residents of the village believe that settlers living in the nearby settlement of Shavi Shamron were responsible for these attacks.

Yasser, 54, recalls that on the morning of 2 October, while he was at a local gas station, a worker there told him that he had seen settlers stepping out of buses and wandering around the Faqha family’s land. Despite the worker’s warning, Yasser did not anticipate that the settlers would attack his land and did not go to check on it. However, on 5 October, when Yasser, his wife and children headed towards their land for the olive harvest, Yasser’s wife saw that some olive trees had been destroyed and some of the olives stolen. Yasser asserts that a number of his trees were fruitless and many had broken branches. According to Yasser, a total of 40 olive trees were damaged in the attacks. Yasser depends on these olive trees to provide an annual income to support his family. Each year the trees produce 20 tanks (approximately 360 kilograms) of olive oil that Yasser sells for revenue. (Al-Haq Affidavit 9052/2013) 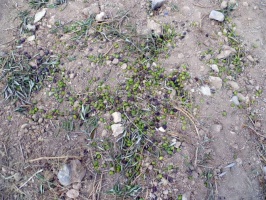 On 5 October, Sidqi, 69, his wife and their son headed towards their land which is located in Abul Hur, five kilometres away from the settlement of Shavi Shamron. Sidqi owns three dunums of the family land housing 40 year-old olive trees. When he arrived at his land, Sidqi was shocked to see large quantities of his harvest scattered across the ground. Later that day, Sidqi realised that his nephew’s land, adjacent to his, had also suffered damage and theft of olive produce. According to Sidqi, this is the first time that his olive trees were attacked. In light of the warning given to his nephew, Yasser Faqha, at the gas station a few days previously, Sidqi believes that settlers from the Shavi Shamron settlement are responsible for the attack on the family’s land. For Sidqi, the yield from the olive harvest is used for domestic consumption. After examining the land, Sidqi believes that the attacks took place three days before 5 October, as the olives on the ground had already withered when they arrived. (Al-Haq Affidavit 9051/2013)

Al-Haq expresses its grave concern at the incidents of settler violence carried out against Palestinian civilians and their property. Al-Haq calls on Israel to abide by its obligations under international law as an Occupying Power, including its obligation to protect occupied territories, property and its people. Acts of settler violence almost always go unobserved by the Israeli authorities and are becoming the norm, especially during the olive harvest season. Al-Haq strongly condemns the total impunity granted by Israel to the settlers, allowing them to continue to engage in campaigns of violence and intimidation against the Palestinian civilian population.