Israel imposes restrictions on Palestinian farmers who want to access the olive groves located in proximity to settlements or behind the Annexation Wall. In many locations, Palestinian farmers are required to apply for permits in order to be allowed entry into their own lands. Palestinians are often denied permits or granted insufficient time to adequately tend their land; these restrictions often become more severe during olive harvest season. In addition, during the harvest season, Palestinian farmers are subject to harassment and attacks by Israeli settlers. Settler violence also encompasses the destruction, damage, and burning of olive trees.

In the past few weeks, Al-Haq documented several incidents relating to settler violence and Israeli limitations against Palestinian farmers during the olive harvest season.

‘Afaf, 40, and her husband own approximately 25 dunums of agricultural land, including approximately 300 olive trees, at the borders with the Izdibar settlement southwest of Bethlehem. Following the construction of the settlement 15 years ago, the family has not been able to access their lands.

On Thursday 16 October, ‘Afaf and her four children headed to their land in order to harvest the olive trees. While there, two settlers approached her and ordered her to leave. One of them told her that she should acquire a permit from the Gosh ‘Etzion settlement to enter the land, while the other told her that he owns the land. ‘Afaf refused to leave. One of the settlers made a phone call and a few minutes later, an Israeli military jeep arrived with six soldiers. The soldiers informed ‘Afaf that she has to leave the land and that the settler in charge of the Izdibar settlement was not available then so they cannot let her stay without his consent. Being afraid for her children’s safety, ‘Afaf left without harvesting the olive trees. (Al-Haq Affidavit No. 10114/2014)

Hammam, 21, lives in Rummanah, 15 kilometres to the west of Jenin. The Annexation Wall runs through Rummanah, prohibiting the residents from reaching their agricultural lands planted with olive trees on the other side of the Wall. The Israeli military had set up Gate #154 through which Palestinian farmers have to pass to get to their lands. The farmers have to acquire permits from the Israeli authorities in order to be allowed entry into their own lands situated behind the Wall.

In preparation for this year’s olive harvest season and as a Palestinian farmer, Hammam applied for a permit and was granted one by the Israeli authorities to harvest the olive trees in the lands near his town. On 22 October at approximately 7:00 a.m., Hammam arrived to Gate #154 and waited there for an hour along with other farmers and land owners. When it was Hammam’s turn to have his permit and identification card inspected, the Israeli soldier confiscated Hammam’s permit and ordered him to return to his village. The soldier also informed Hammam to refer to the Israeli Civil Administration without further clarifications. Hammam recalls that the same incident happened to two other farmers from the village. Hammam’s income is reliant upon the annual harvest; the denial of access to his land will cause him great hardship. (Al-Haq Affidavit No. 10117/2014) 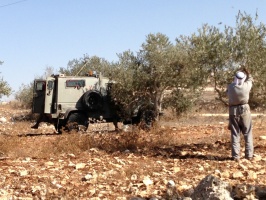 On Saturday 11 October, ‘Abdelrahman, 45, along with his wife and three children were harvesting their olive grove near the Avni Sefsh settlement near Tulkarem. At approximately 4:00 p.m. and after having spent the whole day there, three Israeli settlers approached the family, one of them carrying a knife in his hand. The settlers yelled at the family and threatened that they would slaughter them if they did not leave. One of the settlers threw stones at ‘Abdelrahman, some of which directly hit him in his legs. The family realized the gravity of the situation and started running for their lives as the settlers continued to throw stones at them. ‘Abdelrahman and his 10-year old son had to seek medical treatment at a hospital in Tulkarem as a result of the injuries they sustained. ‘Abdelrahman’s wife, Haneen Rajab, 35, was also injured.

‘Abdelrahman submitted a complaint to the Palestinian police and the Palestinian liaison office, which transferred the complaint to the Israeli liaison office. ‘Abdelrahman was summoned to the Israeli Civil Administration in Ariel and was interrogated on the incident by the Israeli police. He was asked to identify pictures of the perpetrators, but he was unable to do so. ‘Abdelrahman stated that there are surveillance cameras surrounding the settlement where the incident took place. When they escaped from the settlers, the family left behind 10 big bags of olives, a wooden ladder, a cell phone, and other belongings which ‘Abdelrahman did not find when he returned to his land the following day. (Al-Haq Affidavit No. 10115/2014)

Israel continues to deny Palestinians their fundamental right to self-determination, including the principle of sovereignty over land and natural resources, depriving them from their means of livelihoods, in contradiction to Article 1 of the International Covenant on Civil and Political Rights (ICCPR). Under international humanitarian law and as stated in the Fourth Geneva Convention, Israel has an obligation not to restrict the right to work of Palestinians in the Occupied Palestinian Territory (OPT). Also, the International Covenant on Economic, Social and Cultural Rights obliges Israel to respect, protect, and fulfil the right to work of Palestinians in the OPT. The Annexation Wall and the permit system amongst other measures and policies applied by Israel prevent Palestinians’ right to movement which seriously impacts their livelihoods.

Furthermore, Al-Haq expresses its grave concern at the incidents of settler violence carried out against Palestinian civilians and their property, and the state of impunity perpetuated by Israel. As an Occupying Power, Israel has to abide by its obligations under international law to protect the property and people in occupied territories. In its recently published concluding observations following the ICCPR review of Israel, the UN Human Rights Committee expressed its concern with settler violence against Palestinians and the lack of effective accountability and protection from such acts by Israel. The Committee urged Israel to ensure prompt, thorough, independent and impartial investigations in incidents of violence perpetrated by private actors against Palestinians and their property.