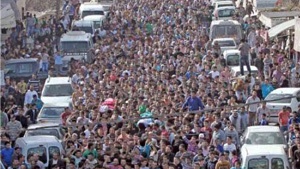 On Wednesday, 14 October 2015, Israel approved a proposal to hold the bodies of alleged Palestinians attackers killed during attacks, thereby denying families from burying their loved ones. Israel is currently holding the bodies of 24 Palestinians, including 6 children, who were killed by the Israeli Occupying Forces (IOF) for allegedly carrying out attacks against Israelis.

Since 1 October 2015, Israel killed 70 Palestinians in the Occupied Palestinian Territory and Israel,[1] of which 44 were killed in alleged attacks against Israelis. This is a direct result of Israel’s use of excessive and lethal force against Palestinians. This has revealed an Israeli trend of using lethal force to kill Palestinians from close proximity even in situations where other means are possible to control and subdue the alleged attacker.[2] According to international principles, the use of lethal force is only permitted “when strictly unavoidable in order to protect life”[3] and its use must aim to preserve human life. The manner in which many Palestinians were killed indicates that the killings may amount to unlawful killings.

Below is a list of the Palestinians whose bodies still remain in the custody of the IOF. The list includes the bodies of 10 Palestinians from Jerusalem, 13 from Hebron (including a 73-year-old woman) and a child from Jenin.

Holding the bodies of the deceased is not a new practice by Israel; it has been used previously to “deter other Palestinians from carrying out attacks” or as “bargaining chips” for prisoner

By retaining the bodies of those killed, Israel is directly violating its obligations under international law. Under customary international humanitarian law, parties of armed conflict must respect the dead.[5] An obligation to return remains of the deceased and the personal effects of the dead is set forth in the Geneva Conventions[6] and is reiterated by Additional Protocol I (AP I). This includes collecting, evacuating and burying the deceased. Under the provisions of Article 130 of the Fourth Geneva Convention, the deceased must be “honourably buried, if possible according to the rites of the religion to which they belonged, and that their graves are respected, properly maintained, and marked in such a way that they can always be recognized”. The families of the deceased must also be notified. According to Article 32 of AP I families have the right “to know the fate of their relatives” as well as “the exact location of their graves”.[7]

The customary rule of the obligation for respectful burial and tending of graves was also upheld by the Israeli High Court (HCJ). In 2002, the HCJ in the Jenin (Mortal Remains) case upheld that burial of the deceased must be performed with respect, in a timely manner and according to religious custom, and if possible, the remains must be returned to the families of the deceased. As recognized by the HCJ, this obligation is “a direct consequence of the principle for the dead – respect for all dead”. [8]

Al-Haq is deeply concerned by Israel's illegal practice of holding the bodies of deceased Palestinians and urges Israel to return the bodies of the deceased to their families for proper burial and mourning.

[1] This number does not include 8 special cases. See: http://www.alhaq.org/documentation/field-updates-2015/971-palestinians-killed-in-the-opt-since-1-october-2015

[2] For example in this video, Fadi Alloun was fatally shot by an Israeli officer in Jerusalem. The police officer is seen firing one shot and then Fadi is seen falling to the ground. The officer, however, continued shooting even after Fadi fell down and the sound of six more shots is heard.

[3] Provision 9, United Nations Basic Principles on the Use of Force and Firearms by Law Enforcement Officials, (1990).