"From now on anyone who plots, plans or considers carrying out an attack will know that his family will pay a heavy price for his deed. The consequences will be harsh and far-reaching, like the decision I made regarding the mother and relatives of the terrorist who perpetrated the attack in Armon Hanatziv in Jerusalem.” Israeli Interior Minister Arye Deri[1]

In the early hours of 17 January 2017, Israeli authorities arrested Nadia Abu Jamal from her in-law’s home in occupied East Jerusalem. She was then "deported"[2] from occupied East Jerusalem, a forcible transfer resulting in the disruption of her life and the lives of her children, 8-year-old Waleed, 6-year-old Salma, and 5-year-old Mohammad. This move comes after a series of collective punishment measures taken against Nadia and her family after Nadia's husband allegedly committed an attack in West Jerusalem in November 2014. 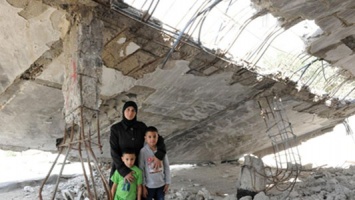 On 18 November 2014, Nadia’s husband was killed while allegedly carrying out an attack. Immediately thereafter, Nadia's family unification permit was revoked and the Israeli National Insurance Institute punitively revoked health insurance and other benefits from Nadia’s three children, two of whom suffer from chronic medical conditions for which they require regular medical attention and follow up.[5] Within a few days, Nadia received a letter from the Israeli Interior Ministry informing her of the "deportation" order against her and demanding that she leave occupied East Jerusalem.

On 30 November 2014, the Israeli organization, HaMoked, filed a petition against Nadia's "deportation" with the Israeli High Court of Justice (HCJ). On 22 July 2015, the HCJ (decision 813/14) confirmed the "deportation" order. HaMoked asserted that the Court’s decision was “a deliberate act of revenge against the woman and her children for a crime they had not committed.” The Court also disregarded the expert opinion “concerning the children’s mental condition, which was fragile and difficult as it is.”[6] Nadia’s children attend schools and receive medical care in occupied East Jerusalem.

Reviving its practice of punitively demolishing homes of Palestinians who allegedly commit attacks, on 6 October 2015, Israel punitively demolished Nadia and Ghassan's home, displacing Nadia and her children. As a result, Nadia was forced to move into her in-law's home with her three children and had been living there until her arrest and "deportation" on 17 January 2017.

Revocation of residency rights, forcible transfer of protected persons, and punitive home demolitions all constitute serious violations of international human rights and humanitarian law and feed into Israel's broader policies and practices of oppressing the protected population of occupied East Jerusalem. Article 49 of the Fourth Geneva Convention prohibits the transfer of the protected Palestinian population.[7] Forcible transfer is also considered a grave breach of the Fourth Geneva Convention, a war crime and a crime against humanity under the Rome Statute of the International Criminal Court.[8] Israel’s punitive measures against Nadia and her family all constitute illegal collective punishment, which is prohibited under international humanitarian law. Specifically, Article 33 of the Fourth Geneva Convention strictly prohibits collective penalties and measures of intimidation against protected persons and their property “for an offence [they have] not personally committed.”

Israeli measures against the Abu Jamal family also violate several provisions of international human rights law. This includes the right of residence and freedom of movement as fundamental human rights;[9] the protection of the family as a "natural and fundamental group unit of society";[10] and ensuring that the best interest of the children is the primary consideration in all actions relating to them.[11]

The story of Nadia Abu Jamal and her family provides a clear picture of Israel's overarching policy toward occupied East Jerusalem: the forcible transfer of Palestinians, whether through the actual revocation of residency and property rights, or through the intentional creation of a coercive environment that forces Palestinians to leave, all in an effort to achieve a Jewish majority in the city and further consolidate Israel's control over occupied East Jerusalem.

Immediate action must be taken to protect the Palestinian population in the occupied Palestinian territory (oPt) and hold Israel accountable for its violations of international law. Therefore, we urge the international community to:

Listen to Nadia speak about her case:

[2] Official Israeli records refer to the forcible transfer of Nadia as a "deportation," but pursuant to international humanitarian law her removal from occupied East Jerusalem to another part of occupied Palestinian territory constitutes forcible transfer. See Al-Haq, Forcible Transfer of Palestinian Family Members of Accused, 31 October 2015, available at: http://www.alhaq.org/advocacy/topics/population-transfer-and-residency-right/981-deportation-of-palestinian-family-members-of-accused

[4]On 25 January 2017, Israeli Minister of Interior Arye Deri announced that he revoked the status of 11 family members. On 26 January, the Appeals tribunal issued temporary orders suspending the Minister of Interior's decision for the time being and the state was given seven days to respond. http://www.hamoked.org/Document.aspx?dID=Updates1834.

[5] The National Insurance Institute claimed that the children’s center of life was not Jerusalem and thus stopped their health insurance and national insurance rights. The children never left Jerusalem and to-date continue to live with their grandparents in Jabal al Mukaber.

[6] HaMoked, At the end of the hearing on HaMoked’s petition: the HCJ allowed the state to deport the widow of the assailant in the attack at the synagogue in HarNof  22 July 2015, available at http://www.hamoked.org/Document.aspx?dID=Updates1523

[9] Article 12 of the International Covenant on Civil and Political Rights provides that “Everyone lawfully within the territory of a State shall, within that territory, have the right to liberty of movement and freedom to choose his residence.”

[10] Article 10 of the International Covenant on Economic, Social and Cultural Rights recognizes the family as “the natural and fundamental group unit of society”, and should be accorded “the widest possible protection and assistance, particularly for its establishment and while it is responsible for the care and education of children”.

[11] Article 3(1) of the Convention on the Rights of the Child underlines that “[i]n all actions concerning children, whether undertaken by public or private social welfare institutions, courts of law, administrative authorities or legislative bodies, the best interests of the child shall be a primary consideration.”