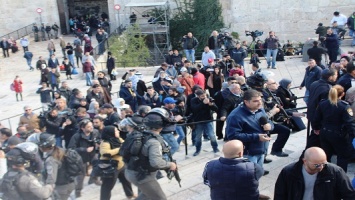 Following the announcement of United States President Donald Trump on 6 December 2017 recognizing Jerusalem as the capital of Israel, Palestinians throughout the occupied Palestinian territory immediately began protesting the decision. The Israeli Occupying Forces (IOF) met protestors in the Gaza Strip and West Bank with excessive use of force, and imposed an array of measures to prevent Palestinians in East Jerusalem from peacefully assembling there. Owing to Israel’s administrative fragmentation of the occupied territory, it has extended its domestic law and policing to East Jerusalem, enabling it to deepen its effective control and stifle Palestinian protest. More broadly, Israel carries out an array of administrative and punitive measures, such as residency revocations, against Palestinians in Jerusalem, in an attempt to remove their presence from the city and quash any political resistance, including peaceful assemblies, to its unlawful colonisation there.

While media attention was focused on the Palestinian reaction on December 7th, one day after the announcement, the IOF effectively quashed Palestinian assembly. Methods used that day included: cordoning off the area around Damascus Gate with metal barriers; preventing Palestinians from entering the area of the steps leading to the Gate (with the exception of residents of the Old City); using pairs of IOF on large horses to disperse individuals gathering on the sidewalks; sending columns of soldiers marching throughout the Old City and charging directly into gathering crowds to disperse them at Damascus Gate; stationing soldiers in groups of four or more at watch points flanking the Damascus Gate steps and stationing snipers in the narrow windows above Damascus Gate.