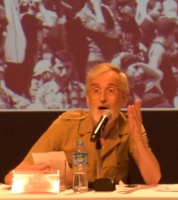 The right of the Palestinian people to self-determination is based on the norm of law that accepts the attachment of a people to their territory, and their right to control their fate. The antecedent of this norm is observed during the period of colonialism, when the European powers acknowledged an obligation to promote the interests of indigenous populations, even if they did not implement that obligation in practice. The norm was developed during the period of the League of Nations through the mandate system and through international oversight of the rights of minority populations.

The UN Security Council used its powers under the UN Charter a few years later when effectuation of the right to self-determination was threatened in Southern Rhodesia. The Security Council declared that a declaration of independence there, to be carried out in a way that excluded the majority indigenous population from political participation, was a threat to international peace.

Through all this development, self-determination for the indigenous population of Palestine was accepted in principle but overridden in practice. The Palestine Mandate required Great Britain as Mandatory power to implement the Balfour Declaration, which called for a “Jewish national home” in Palestine. The Zionist Organization aimed at statehood for Jews in Palestine, statehood that would inure to the benefit of Jews worldwide. Great Britain took its obligation to mean that it should facilitate immigration of Jews into Palestine, even in numbers that would allow the Zionist Organization to take control of the territory. When the people of Palestine took up arms against Great Britain, British troops suppressed their resistance.

John Quigley is Professor Emeritus at the Moritz College of Law of The Ohio State University in Columbus, Ohio, USA. A specialist in public international law and the law of human rights, he writes on key legal issues relating to Palestine. The International Diplomacy of Israel’s Founders: Deception at the United Nations in the Quest for Palestine (2016) explains how a Jewish state came to be supported in relation to Palestine. The Six-Day War and Israeli Self-Defense: Questioning the Legal Basis for Preventive War (2013) assesses the legality of Israel’s entry into control of the Gaza Strip and West Bank. The Statehood of Palestine: International Law in the Middle East Conflict (2010) traces Palestine as a state from the Treaty of Lausanne. The Case for Palestine: An International Law Perspective (2005) is a legal history of the conflict over Palestine.

This paper was presented at Al-Haq Seminar on "The Right of the Palestinian People to Self-Determination" held in Ramallah on July 13, 2019.