Main Menu
Indiscriminate Attacks Continue to Escalate Against the Gaza Strip
Latest Topics
Palestinian Civil Society Calls for Effective Measures by all States to Stop Israel’s Illegal Annexation of the Occupied West Bank and Grave Violations of Human Rights
Palestine: Israel’s Illegal Annexation of Occupied Palestinian Territory Must Be Countered by International Community
Joint Statement: The Nakba at 72: A Legacy of Settler-Colonialism & Apartheid over the Palestinian People
Palestinian Civil Society Organizations Issue a Statement of Alarm Over the Selection of Emi Palmor, Former General Director of the Israeli Ministry of Justice to Facebook’s Oversight Board
Annexing A City: Israel’s Illegal Measures to Annex Jerusalem Since 1948
Al-Haq Condemns Attempt to Smear Al-Haq, Its Staff, and Partners in Recent Report
Indiscriminate Attacks Continue to Escalate Against the Gaza Strip
Ref.: 252/2012
15، Nov 2012 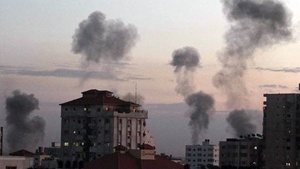 Since breaking an Egyptian-brokered truce with Hamas on Wednesday 14 November, Israel has launched an indiscriminate and disproportionate barrage of airstrikes and shelling on the population of the Gaza Strip. Some 250 Israeli attacks have been launched in the past 24 hours alone. As a human rights organisation dedicated to the protection of human rights in the Occupied Palestinian Territory (OPT), Al-Haq is gravely concerned by the escalating violence and its impact on the civilian population of the Gaza Strip. At least 25 Palestinians have been killed by Israeli attacks in the past week. This figure includes eight children, two of whom were under 12 months old, and a pregnant woman. Hundreds of Palestinian civilians have been injured, many while in their own homes. The Gaza Strip, which has been subjected to an illegal regime of closures imposed by Israel since June 2007, is currently little more than an open-air prison.

On Thursday 8 November, following a lull in violence, a 13-year-old Palestinian boy died after being shot in the abdomen by the Israeli military during an incursion into the Gaza Strip. Two days later, on Saturday 10 November, four more Palestinian civilians, including two children, were killed when several Israeli shells landed on a playground to the east of Gaza City. That same day, Palestinian militants fired an anti-tank missile that wounded four Israeli soldiers on the boundary between Israel and the Gaza Strip.

These attacks, and others, fuelled a spiral of retaliatory and disproportionate violence, which continued until a truce was agreed on Tuesday. The following day, Israel broke the agreed truce when they carried out the extrajudicial killing of Ahmad Al-Jabari, one of the leaders of the military wing of Hamas, and since then Israel has launched a relentless attack on the region. According to statements from the Israeli Government, this is only the beginning of the military operation which maybe include a ground invasion. Three Israelis have also been killed by indiscriminate rockets fired by Palestinian armed groups in the Gaza Strip.

At present, Israel is granted an unconscionable level of impunity by the international community. The lack of implementation of the recommendations of the UN Fact-Finding Mission Report on the Gaza Conflict and the willingness to overlook Israel’s repeated violations of international law have resulted in the de facto sanctioning of Israel’s disproportionate use of force in the Gaza Strip by the international community. Many Palestinians fear that there is nothing to prevent the crimes of ‘Cast Lead’ from being committed again. These fears are being borne out by the current escalation in violence, which closely mirrors the lead-up to the 2008-2009 military assault on the Gaza Strip.

Given that there is currently no deterrent against Israeli violations, it can have come as no surprise that Israel decided to break Tuesday’s truce. The fact that Israel instigated the present round of violence also undermines the Occupying Power’s claims that it is acting in self-defence against terrorism. Regardless, given that these attacks are taking place within the context of an ongoing armed conflict, international humanitarian law (IHL) applies and Israel cannot justify its actions under the paradigm of terrorism.

As the Occupying Power, Israel is under an obligation to take all necessary measures to protect the civilian population of the occupied territory. According to the rules of IHL, the Israeli military must at all times distinguish between civilian and military targets. In addition, Israel must adhere to the principle of proportionality, which states that any attack that may be expected to cause loss of civilian life, injury to civilians or damage to civilian objects, which would be excessive in relation to the concrete and direct military advantage anticipated, is prohibited.

Despite the grossly asymmetrical nature of the conflict, Palestinian armed groups are also under the obligation not to target civilians.

In the event of a ceasefire, the international community must ensure that Israel abides by the terms of any such truce. Until Israel is held accountable for its repeated violations of international law, it will continue to flaunt its obligations without fear of censure.