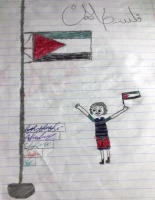 The youngest Palestinian female prisoner is set to be released on Friday 13 February 2014. On this occasion, Al-Haq would like to highlight the policy of arbitrary arrest and detention as one of the many Israeli violations against Palestinians, particularly children, in the Occupied Palestinian Territory (OPT). Fourteen-year-old Malak 'Ali Al-Khatib is a student at the Beitin High School near Ramallah. On Wednesday 31 December 2014 at approximately 7:30 am, Malak headed to her school to sit for her English language mid-year exam. At 9:00 am that morning, Malak's father, 'Ali, 58, received a phone call from the head of the Beitin village council, Abu Mazen, who informed him that his daughter Malak had been arrested by the Israeli Occupying Forces (IOF). Malak was near Road 60 at the time of her arrest, approximately 175 metres away from her school.

'Ali, his wife and their son immediately went to the Benyamin police station where Malak was reported to be held. They waited for approximately three hours before an investigator informed them that Malak had been throwing stones on Road 60 and crossed the road carrying a knife with the intent to stab an Israeli soldier. At approximately 2:00 pm that day, they were able to see Malak for less than five minutes in the presence of an investigator. She looked pale but reassured her family. They told her what the investigator had said about her carrying a knife and attempting to stab a soldier, which she denied. ‘Ali recalls that the investigator then looked at her, and she promptly said that she had a knife. The family was asked to leave, and were told to wait for a phone call to know where Malak would be taken.

That night at approximately 8:00 pm, 'Ali was informed that Malak was transferred to the Hasharon prison. On 1 January, the Prisoners' Association called 'Ali and told him that Malak might have an upcoming hearing, and that she might be released on a 3000-4000 shekels bail (approximately USD 775-1,030). That day at around 6:30 pm, the Association called and informed 'Ali that Malak's detention had been extended and a court date was scheduled for 14 January 2015. She had three charges against her: carrying stones and attempting to throw them towards Road 60, throwing stones, and “possessing a knife beyond her residence” in order to stab  soldiers in case they try to arrest her.[1]

On 14 January, the family was present at the Ofer military courtroom at approximately 7:00 am. They were held waiting until 5:00 pm when the hearing took place. Malak appeared before the court with her hands and legs cuffed. The judge asked 'Ali if he would pledge to monitor Malak's behaviour, if she was released, to which he consented. However, the judge ordered for Malak to undertake a behavioural test in order to see whether she would attempt such action again. Malak had another five court sessions. According to Malak’s father, during their testimonies Israeli soldiers did not mention anything about the knife that she was accused of carrying.

During the fifth court session on 19 January 2015, Malak was sentenced to two months in jail, three years of probation, and a penalty of 6,000 shekels (approximately USD 1,540). The family has not been able to visit Malak while in prison as they did not receive permits from the Israeli authorities. Malak will be released on 13 February 2015. (Al-Haq Affidavit No. 10375/2015)

Israel's violent policies of arbitrary arrests and detention, excessive use of force, and house demolitions, to name but a few, used against Palestinians continue to intimidate children and infringe upon their freedoms and rights in the Occupied Palestinian Territory. In December 2014, there were 156 Palestinian child prisoners held in Israeli prisons, 17 of whom were under the age of 16. Article 37 of the UN Convention on the Rights of the Child stipulates that the arrest, detention and imprisonment of children should be used as a measure of last resort. Children deprived of their liberty are particularly vulnerable and must be treated with humanity and respect, taking their age into account. Accordingly, children should be held separately from adults, and have the right to family visits or correspondence, except in exceptional circumstances. As noted, Malak’s family was prohibited from visiting her. It is unclear as to whether she was held with the general, adult population of the prison. Additionally, under international law, the interrogation process must always be carried out in the presence of the child's parent/legal guardian and/or a lawyer. In Malak's case, the father recalls that his daughter was subject to interrogation without the presence of a lawyer or her parents. More broadly, the transfer of Palestinian detainees into Israel is illegal under international law and constitutes a war crime. According to the Fourth Geneva Convention, protected persons should be detained and if convicted serve in the occupied territory itself.

According to Addameer Prisoner Support and Human Rights Association report published in 2012, yearly there are approximately 700 Palestinian children under the age of 18 from the West Bank who are prosecuted through Israeli military courts after being arrested and interrogated by the IOF. There are two military courts in the occupied West Bank, Ofer near Ramallah and Salem near Jenin, that serve to prosecute Palestinian civilians therein.