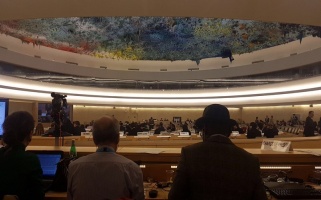 Al-Haq attended the 37th regular session of the United Nations (UN) Human Rights Council, which was concluded on 23 March 2018 with the adoption of five resolutions under agenda item 7: human rights situation in Palestine and other occupied Arab territories. Al-Haq’s participation included two written submissions, two oral interventions under item 7, the participation in two side events, and meetings with diplomatic missions in Geneva and UN special procedures mandates.

During the interactive dialogue with the UN Special Rapporteur on the situation of human rights in the Palestinian Territory occupied since 1967, Mr. Michael Lynk, Al-Haq delivered a joint oral intervention with BADIL Resource Center for Palestinian Residency and Refugee Rights, Community Action Centre (Al-Quds University), and the Society of St. Yves – Catholic Center for Human Rights. The joint statement highlighted Israel’s continued annexation of Jerusalem through the fast tracking of bills at Israel’s Parliament aimed at altering Jerusalem’s municipal borders while escalating the forcible transfer of Palestinians from the city.

The joint oral intervention was based on a joint written submission to the Human Rights Council ahead of its 37th regular session, titled: “Legalising the Illegal: The Status of Jerusalem and Unlawful Forcible Transfer”. In the joint submission, Al-Haq, BADIL, Cairo Institute for Human Rights Studies, Community Action Centre, and the Society of St. Yves highlighted Israel’s unlawful efforts to legislate for the removal of Palestinian neighbourhoods behind the Annexation Wall from Jerusalem and to revoke Palestinians’ East Jerusalem residency status, in an attempt to gradually eliminate Palestinian presence from Jerusalem.

During the General Debate on item 7, Al-Haq delivered a second oral intervention highlighting the ongoing displacement and dispossession of Palestinians on both sides of the Green Line, ahead of the 70th commemoration of the Nakba in May 2018, the same time that the United States plans to move its embassy from Tel Aviv to Jerusalem, in violation of international law. In this oral intervention, Al-Haq called for an end to Israel’s fifty-year occupation of the Palestinian Territory, the realisation of Palestinians’ inalienable rights to self-determination, including return, and for accountability, including through the release of the UN database on businesses operating in Israeli settlements.

Earlier in February 2018, Al-Haq submitted a joint written submission with Cairo Institute for Human Rights Studies, titled “Israeli occupation further entrenched with business operations: Update on wineries, banks, fisheries and other industries in the Occupied Palestinian Territories”, which highlighted corporate complicity in Israel’s occupation and called for corporations to be held to account for their involvement in human rights violations in the Occupied Palestinian Territory (OPT), especially where such activities may amount to war crimes. The submission notes that corporations will continue to contribute to the exploitation of Palestinian land and natural resources until adequate action is taken by the international community in line with international law.

During the 37th regular session, Al-Haq further participated in two side events focusing on Jerusalem and business and human rights in the OPT. On 15 March 2018, Al-Haq presented at a side event organized by Cairo Institute for Human Rights Studies, titled: “The UN Database on Businesses Active in Israeli Settlements”. During the side event, Al-Haq presented on the UN’s historical role in relation to corporate involvement in armed conflicts, using the example of the UN Expert Panel on the Democratic Republic of the Congo and its public listing of companies involved in that conflict.

On 20 March 2018, Al-Haq participated in a second side event organized by BADIL Resource Center for Palestinian Residency and Refugee Rights, titled “Ongoing Annexation and Colonization of Jerusalem”. Speakers included the UN Special Rapporteur on the situation of human rights in the OPT, Mr. Michael Lynk, and representatives of BADIL, Al-Haq, the Society of St. Yves, and Addameer. During the side event, Al-Haq gave a presentation titled “Altering the Legal Status of Jerusalem through Bills and Legislation”, reflecting the contents of the detailed legal brief on Jerusalem prepared with Community Action Center (Al-Quds University).[1]

Meetings with States and Efforts to Remove Item 7

During meetings with diplomatic missions in Geneva, Al-Haq continued to advocate for the release of the UN database on businesses active in Israeli settlements as a step towards ending corporate complicity in Israel’s occupation. In addition, together with representatives from Palestinian civil society, Al-Haq provided an overview of recent escalations in Jerusalem and Israel’s emboldened attempts to legally annex the occupied West Bank. Finally, Al-Haq and Palestinian civil society stressed the importance of agenda item 7: human rights situation in Palestine and other occupied Arab territories, and the need to maintain it on the Council’s agenda, as long as Israel’s occupation of the Palestinian Territory continues, and impunity for its violations of international law prevails. The removal of item 7 from the agenda of the Human Rights Council will only reinforce Israel’s continued efforts to silence Palestinians in international fora, including at the UN, and entrench its occupation and colonisation of the Palestinian Territory.