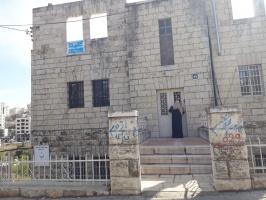 Al-Haq is following the developments regarding the arbitrary eviction of five families from their homes in Ramallah City of the Occupied Palestinian Territory (OPT). According to written testimonies given by the occupants and documented by Al-Haq, dozens of members of the Palestinian Authority’s Police, National Security Service and the Public Prosecutor’s Office raided the homes of the five families, on Tuesday, 6 June 2018. The tenants were ordered to evacuate their homes immediately based on orders issued by the Ministry of Finance in 2017, as well as orders issued by the Presidential Office, without providing a judicial decision regarding the eviction. Families were also informed that they will be forcibly evicted from their homes should they not voluntarily abide by the eviction order within 24 hours.

On 7 November 2018, a Ramallah Magistrates' Court judge issued an urgent decision to terminate the eviction order against one of the five families. Despite the decision, members of the National Security Service, the Police and the Public Prosecutor's Office returned to the residence of the citizens to enforce the eviction order. Consequently, three families were evicted from their homes by force. The forcible eviction included the removal of their belongings from their homes, without regard to the bad weather conditions, or to the safety and dignity of the residents, including children, women and elderly.

All five families have lived in their homes in Ramallah since before 1967, and have been renting the homes from Israel's Custodian of Absentees' Property. Following the Oslo Agreement, the ownership of these houses were transferred to the Palestinian Authority's Property Tax Department and Ministry of Housing, to which residents continued to make their rental payments until today.

Al-Haq affirms that the eviction measures taken by the National Security Service, the Police and the Public Prosecutor's Office amount to forced and unlawful evictions. The failure of the law enforcement authorities and the judicial authorities to comply with the judicial decision of the Magistrate's Court Judge, and their persistence to enforce the eviction constitute an attack on the independence of the judiciary. Al-Haq further asserts that such measures are evidence to the continuous interference by the Palestinian Executive Authority and its Apparatus in the judiciary, which amount to constitutional and legal offenses, as stated in the Palestinian Basic Law and the amended Penal Law.

Al-Haq further affirms that the forced eviction of citizens from their homes is in violation of the State of Palestine's obligations under the international human rights conventions, to which it has acceded without reservations, in particular the International Covenant on Economic, Social and Cultural Rights (ICESCR). In its General Comment No. 7 on the right to adequate housing, the Committee on Economic, Social and Cultural Rights states that State authorities must undertake the eviction as permitted by law, and in conformity with the provisions of ICESCR, that all remedies and legal remedies be available to those affected, and that all suitable solutions are provided in consultation with those affected.

Al-Haq calls for the Palestinian Executive Authority and its Apparatus to comply with judicial decisions, to stop all eviction measures, to respect the State of Palestine's obligations under international human rights law, and to provide equitable remedies for those affected.