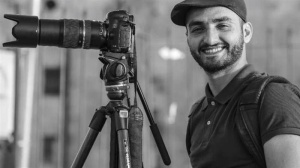 Mustafa al-Kharouf, 32, was born in Algeria to a Palestinian Jerusalemite father and an Algerian mother and has lived in East Jerusalem with his family since 1999. He is married to Tamam al-Kharouf, a resident of East Jerusalem, and has a 22-month-old daughter named Asia. Mustafa al-Kharouf is a photojournalist who has covered human rights violations by Israeli authorities in the Old City of Jerusalem, including excessive use of force by Israeli forces against Palestinian protesters in and around Al-Aqsa Mosque, for media outlets, including Anadolu Agency.

On 22 January 2019, the Israeli Ministry of Interior ordered the deportation of Mustafa al-Kharouf from his home in East Jerusalem, after denying his request for family unification on undisclosed “security grounds” and alleged “affiliation with Hamas”. Mustafa al-Kharouf and his lawyer reject such claims and believe that the refusal to grant him a residency status is an attempt to hinder him from carrying out his work as a photojournalist. That night, Israeli occupying authorities arrested Mustafa al-Kharouf from his home in East Jerusalem and held him in detention in Givon Prison, where he was been held until the attempt to deport him during the night of 21-22 July 2019.

On 3 May 2019, the UN Special Rapporteur on the promotion and protection of the right to freedom of opinion and expression and the UN Special Rapporteur on the situation of human rights in the Palestinian territories occupied since 1967 sent a communication to the State of Israel following an urgent appeal that was submitted by six human rights organisations, warning against the imminent and unlawful deportation of Palestinian photojournalist Mustafa al-Kharouf, as well as his arbitrary arrest and detention since 22 January 2019.

Within the context of Israel’s measures and policies of restricting and revoking residency rights for Palestinians in Jerusalem, resulting in the displacement and forcible transfer of the protected population in violation of international law, the undersigned organizations call for immediate action to halt the deportation of Mustafa al-Kharouf from Jerusalem to Jordan, or elsewhere, or any forcible transfer or deportation separating him from his wife, child, and family, and ensure his immediate release. Mustafa al-Kharouf must be afforded a permanent residency status that would allow him to live with his family in Jerusalem and realise his rights, including his right to family life, residency rights, his right to health and to social security, and his rights to freedom of movement, expression, opinion and association.